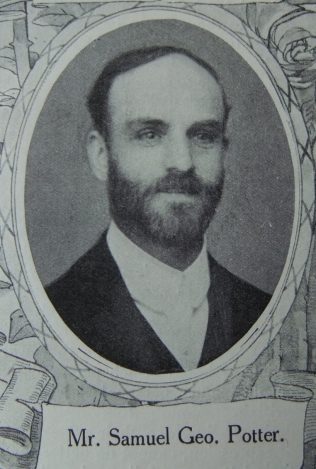 The Circuit Chancellor of Derby 4th is an all-round man, equally at home in the prayer meeting, or engaged in open-air work with a cornet, violin, or concertina, as when dealing with finance in the Quarterly Meeting.

Born at Blackheath (Staffs.), he was brought up in Primitive Methodism, his father being leader of the choir at High Street Chapel for upwards of thirty-four years. Removing to Birmingham, on the formation of new trust at Gooch Street he was added to the list of trustees, and owing to removal afterwards served as Society Steward at Handsworth (Birmingham 2nd).

He is a thoroughly evangelistic local preacher of seventeen years’ standing, and has many calls for pulpit work. In addition he is a class leader, president C.E. Society, Sunday School teacher, member of District Committee, also secretary of local Primitive Methodist Council.

He has served as Circuit Secretary, also Junior Steward, and attended District Meeting as delegate.

Samuel was born in 1871 at Blackheath, Staffordshire, to parents William and Eliza. William was a rivitt forger (1881).

Samuel died on 9 May 1953 at Shelton Lock, Derbyshire.