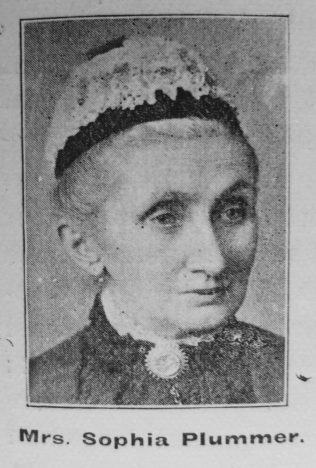 Transcription of Obituary in the Primitive Methodist Magazine by W. Lee

By the death of Mrs. Sophia Plummer, which took place on May 25th, 1902, the Plumstead Circuit has lost one of its oldest and most devoted members.

Mrs. Plummer was born at Scarwing, a village near Dereham, in Norfolk, in the year 1824, and it was there, in her young womanhood, that she gave her heart to God, and united with the Wesleyan Methodist Church, from which church she received her first class-ticket in the year 1842. In 1846 she removed with her husband to London and became identified with our cause in East London.

In 1857 Mr. and Mrs. Plummer came to Plumstead to live, where she at once identified herself with the Primitive Methodist Church in Deadman’s Lane, and remained in fellowship with this society, now known as the Robert Street Church, for the long period of 45 years.

During all these years she exercised a remarkable influence: her deep piety, her unfailing cheerfulness, and her lovable disposition making her the centre of attraction to a large circle of friends. Nor was her influence for good but temporary, it grew and deepened with the years, and at the close of her long, useful and happy life, everybody regarded her as the true spiritual mother of Israel.

Quite early in her association with Robert Street she took up Sabbath School work, and her connection with the work was only severed by her death. For many years she was the teacher of the Young Ladies’ Bible-Class, and many young lives were turned into the ways of righteousness, as a result of her intelligent teaching and tactful, loving sympathy. At the last anniversary of the school on Whit-Sunday, only a few days before her death, she sent to the secretary the sum of £1 10s. which she had collected from friends and visitors to her sick bed.

She was also treasurer of the Ladies’ Sewing Class, which has raised hundreds of pounds for the extension of the work of God in Plumstead and vicinity. And in addition she was a collector for the Benevolent Fund, which has done a good work in relieving the distress of the poor and afflicted in the neighbourhood.

Our beloved sister was a good woman, a woman of holy character, and real saintliness of life. Her presence in the sanctuary was an unfailing benediction. She always brought a cheerful, yet reverent, demeanour to the house of God, and her hearing of the word of God was always intelligent and sympathetic. It was always a pleasure to assist our sister, for the conversation invariably turned upon the service of the previous Sabbath. The good points of the sermon were discussed, and questions asked where difficulties had presented themselves. A diary she kept revealed her very deep interest in the progress of spiritual work. Whenever any event of special note took place, this is recorded with loving cane and exactitude. The conversion of a sinner, the reception of members at the monthly sacraments, these are the entries upon which she loved to dwell.

Mrs. Plummer’s last sickness was of long duration, but her sick chamber was a gracious place. Many seasons of refreshing has the writer enjoyed with her in that sick room. Her piety was as bright and cheerful, her faith in her Saviour as clear and undimmed in her hours pain and weakness as when she enjoyed good health. Only a few hours before she passed away, she followed the prayer that was offered by her minister with singular earnestness and fervour for one so weak.

Her remains were buried in the Plumstead Cemetery on May 29th, 1902, in the presence of a large concourse of sympathising friends. The Rev. W. Lee conducted the service, assisted by Revs. Herwood Allen, R. Andrews, and M. Simmonds. On Sunday, June 8th, the Rev W. Herwood Allen conducted a memorial service in the Robert street Chapel, which was crowded with a sympathetic congregations.

May the mantle of her bright and useful spirit fall upon the sisterhood of our churches!

Sophia was baptised on 2 September 1824 at Scarning (not Scarwing), Norfolk. Her parents were Farmer Trollop, a farmer, and Maria Chapman.