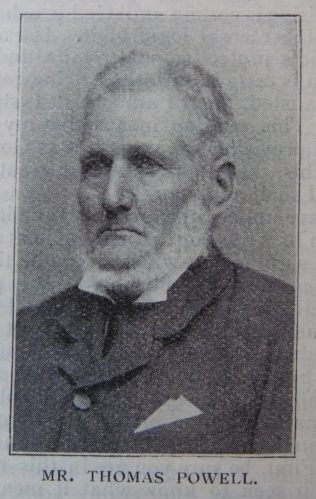 WELSH END is a pleasant hamlet nestling in the obscure and compact parish of Whixall, which, with its ninety miles of circuitous roads and scattered homesteads, is a veritable Free Church Paradise – a noted stronghold of Nonconformity. Apart from the unpretentious Anglican Church, there are two

Wesleyan chapels, a Congregational Church, and the Welsh End Primitive Methodist Church. From the agricultural stand-point Whixall is broken up into a large number of small holdings. The people are thrifty and prosperous. As a community they are characterised for their manly religious and political independence. They are mostly employed as market gardeners, their produce being despatched to the Salopian, Cheshire, and North Staffordshire pottery towns.

Welsh End Primitive Methodism is of long standing. It was one of the earliest places that was missioned in Shropshire. In the “ twenties” of the nineteenth century Welsh End was practically the administrative centre of the “Shropshire Mission,” which subsequently became the nucleus of the extensive Prees Green Circuit. In those remote days the Quarterly Meetings were generally held at Welsh End. It was famous for its powerful missionary meetings and its largely-attended camp meeting services. At the former as many as six ministers have been present, and, at the latter many persons have been born into the Kingdom of God including the Rev. Joseph Preston, who became a Connexional pioneer in some of the southern counties of England.

For nearly eighty consecutive years the Powell family have been prominently connected with the Welsh End Church. Their record of service is unique. They have taken the deepest interest in its varied institutions, and have considerably helped in the development of the society. The late Mr. William Powell, father of Mr. Thomas  Powell was converted in the year 1826, and in 1831 he removed to a small farm nearly opposite the present chapel at Welsh End, where he died in 1857 at the comparatively early age of fifty-eight years.

In an obituary notice which appeared in the Primitive Methodist Magazine for 1857, it is asserted “that he laboured earnestly and faithfully for the prosperity ” of the Welsh End Society. “He was punctual and regular in his attendance at the means of grace, and both by example and precept he endeavoured to promote the glory of God and to spread the savour of Jesus’ name among his neighbours.” He was exceedingly liberal in his gifts to the cause of Christ. In those days, when homes, were few and far between, his house was always open for the entertaining of the preachers of the Gospel. It is said “that his talents were not great, but his piety was deep.” When the congregation was disappointed of a preacher he would supply the  vacant pulpit, “and was heard with great satisfaction.” A short time before his death he was appointed class leader. As he was passing through the valley of the shadow, his son Thomas asked: “Father, do you feel that all is right?” “Oh, yes,” he replied; “if I had the strength, how I would shout His praise!” Like patriarchal Jacob of old, he gathered his numerous family around his couch, and with his latest breath pronounced his farewell blessing upon them. That benediction has reached the third and fourth generation of his descendants ; and in influencing children’s children none can over-estimate the indebtedness of our Church to the spiritual stalwarts, and the moral courage displayed by an earlier generation. Many village churches owe a great deal to the prayers and counsels of the nursing mothers and the fostering fathers of the persecuting past.

Thomas Powell of the Welsh End, as he is familiarly termed, is one of the best known names in the religious circles of North Shropshire. He was born on February 7th, 1833, in the farmhouse where he still resides, and where his father lived before him. In his early manhood he yielded himself to the claims of Christ, and joined the Church at Welsh End. The good work that was begun by the father has been continued by the son. For well-nigh sixty long years Mr. Thomas Powell has been an active member of the Church. For half-a-century he has been a powerful preacher of the Gospel of the Son of God. In the days of long journeys he took his full share of appointments, and was “in labours more abundant.” He has seen many persons savingly converted and enfolded in the Church. As a preacher he has been in constant request for special and ordinary services by his own and the neighbouring Circuits, and occasionally by the sister Churches. In his pulpit and platform efforts he gives evidence of wide reading and careful preparation. He is a man of ready, sturdy, Saxon speech, and, like the early preachers of John Wesley, “he has all his wits about him.” He is quaint, humorous, original, and shrewd. While he has a working knowledge of Adam Clarke’s, Matthew Henry’s, and other standard commentaries, he has also dipped into Butler’s Analogy, that masterpiece of philosophical theology. He has familiarized himself with the sermons of Henry Ward Beecher and other of our pulpit kings. He is always learning, for he carefully reads men and their doings as well as books. He is a keen observer of modern movements in the religious, social, and political realms.

Although Mr. Thomas Powell is an exceedingly busy man, yet he always finds time to attend the week-night preaching services. By his cheerful presence and sympathetic response he is a source of inspiration to the ambassadors of Christ. He is an ardent sermon-taster, and enjoys a good, sound Methodistical discourse.

For nearly fifty years he has been a class-leader, a Trustee, and also Treasurer of the Welsh End Trust Estate. He has had the joy of seeing the society class double its membership. Therefrom have gone two members who became ministers of the Gospel, besides a number of others who have become gifted local preachers and cheerful Church workers.

Mr. Thomas Powell took the lead in the building of the spacious chapel and the erection of the adjoining school-room. Through his foresight the extensive burial-ground was purchased. The debtless property is one of the best village properties in the Connexion, and is a great credit to the Wem Circuit. Mr. Powell has been elected by his Quarterly Meeting to attend three District Synods, and has represented the Tunstall District at the London and Derby Conferences. When he attained his Connexional jubilee, the Welsh End Church recognized the various important services he had unstintedly rendered by presenting him with a framed illuminated address.

Mr. Powell has proved himself to be an able administrator. He has taken an active part in political, parochial, and educational matters. For some years he has been a Parish Councillor. He has served as the Chairman of the Whixall School Board, and at the present time he is Chairman of the Board of Management. There have been times when he could not see eye to eye with his co-members in the councils of the Church and in the discussion of parochial concerns. To the superficial observer he may have appeared obstinate and dogmatic, but his apparent obstinacy has really been consistency to his convictions. He has always been outspoken, manly, and straightforward. He has had the reputation of being a hard hitter. Without trickery or guile he fearlessly states his opinions and defends his position. Beneath a somewhat austere appearance his heart is as gentle as that of a child. In Connexional matters he is loyal to the very core. On the public platform we have listened to his trenchant speech and seen his flashing eye as he has resented those outside speakers who have tried to bestow their condescending patronage, and who thought that Primitive Methodism was really a system of religious emotionalism, and that its members were sadly lacking in mental culture.

In political matters Mr. Powell is a backbone Liberal. In public meetings he has taken a special pleasure in “questioning” Conservative candidates for Parliamentary honours respecting their opinions on national questions.

He has had his numerous sorrows as well as his rapturous joys. The shadows of bereavement have frequently darkened his home and family Circle. These mysterious visitations of the Divine Providence have been beneficial in mellowing his religious life and giving a note of tenderness to his sermons and addresses. Although he has passed his three score years and ten, he is not fossilized in thought nor stereotyped in opinion. He is still young in heart, and as anxious as ever for the continued prosperity of Zion.

In all his good work he has been supported by Mrs. Powell, who belongs to an old Primitive Methodist family at Butler’s Bank in the Prees Green Circuit. Her father (Mr. Tudor) was a devoted local preacher for over fifty years. Amongst the many distinguished persons who visited their homes and shared their hospitality was the venerable Hugh Bourne. Mr. and Mrs. Thomas Powell have followed in the footsteps of their honoured parents. They are given to hospitality, and they have never been happier than when entertaining the servants of the Lord. Their distinguished guests have included Presidents of Conference and heads of Connexional departments, while Circuit ministers and laymen have received the heartiest welcome. Mr. John Wedgwood, Rev. James Macpherson, Dr. Joseph Fergusson, and a host of other Connexional notables have been “housed” at the old homestead.

Mr. William Powell, nephew of Thomas Powell, is deserving of a passing reference. Formerly he was in membership with the Welsh End Society, and he is still connected with the Wem Circuit. He is an acceptable local preacher, of more than average ability. He is a prominent Church worker, and is deeply interested in Temperance and Sunday school movements. Already he has been a representative to the District Meeting, the Annual Conference, the Sunday School Triennial Conference, and the National Council of the Free Churches. The Connexion has not a more loyal family than the Powells, who trace their descent from the old homestead at Welsh End.

Thomas was born on 7 February 1833 at Welsh End, Whixall, Shropshire, to parents William Powell and Mary Austin. William was a farmer.

Thomas became a permanent member of Conference in 1909.

Thomas married Elizabeth Tudor (abt1833-1913) in the spring of 1857 in the Wem Registration District. Census returns identify four children.

Thomas died on 4 May 1912 at Welsh End, Whixall, Shropshire.