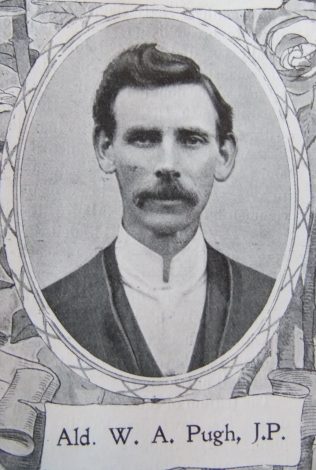 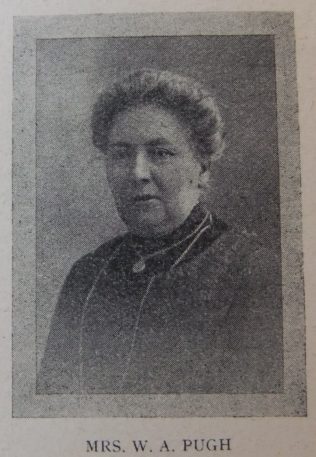 Alderman W.A. Pugh, J.P., is a Primitive Methodist of the second generation. All his life has been spent at Bishop’s Castle where he is honoured and loved. As a local preacher he is ever welcome. He is no orator, but there is a quiet force and a sweet reasonableness about his utterances. The cultured note is there, and clearer still the strain of the Evangel. For many years, Mr. Pugh has been a Sunday School Superintendent, and he believes profoundly that the best Christian strategy is to capture the young. As Circuit steward he is faithful, courteous and progressive. He is convinced that a parsimonious Circuit policy is suicidal.

Local honours, including the mayoralty of his native borough, have been thrust upon him. His home life has been singularly happy, and his gifted wife is a most valuable worker among us. We trust that many years of service are before them both.

William married Alice Marianne Wright (1865-1928) in the spring of 1893 at Chelsea, London. Alice was a daughter of Rev Joseph Cornelius Wright, a Wesleyan Minister. She was a Conference delegate in 1916. Census returns identify two of three children.

William died on 30 August 1940 at Bradley Farm, Much Wenlock, Shropshire.