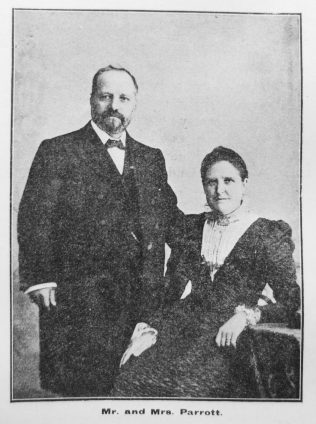 Transcription of Sketch in the Primitive Methodist Magazine by J. Teece

WILLIAM PARROTT, MP. for the Normanton Division, was born at Row Green, Wellington, Somersetshire, on December 18th, 1843. Shortly after his birth the family removed into Yorkshire. At a very early age he was sent to work in a brickyard, and before he was ten years of age he began work in a coal mine, and continued to be so employed for many years. About the year 1872 he was appointed checkweighman at the Good Hope Pit, Normanton Common. In 1876 he was elected to the post of Assistant Secretary of the Yorkshire Miners’ Association. When the West and South Yorkshire Miners’ Associations were amalgamated in 1881, Mr. Parrott was appointed agent of the association. In this capacity he has done work of immense value for the toilers in the coal mines of the district. In wider fields his influence has been felt, for he was present at the first International Conference of Miners held in Belgium, and has had the honour to be chosen one of the delegates to all subsequent conferences. He has taken part in the various conferences between the Federated Coal Owners and the Miners’ Federation, and was present at the Rosebery Conference on November 17th, 1893. He has often spoken to me of the great joy shewn by Lord Rosebery when the decision to end the strike was reached. He came to Barnsley in 1881. Here also work and honours have come to him, for he was a member of the School Board and vice-chairman from 1889 to 1892. He is now a town councillor of the Borough of Barnsley. By those who know him well it is admitted that he has “qualities admirably adapted to his work. There are few men who have worked harder, or done more than he, to improve the lot and elevate the social condition of the working miners.”

He ever feels that the lack of early educational training has hampered him in his work and progress. In a quietly humorous way he said to an interviewer just after his election that he had now reached his sixth standard. “His first standard was the brickyard; standard II. the weaving shed; standard III.  the coal mine; standard IV. checkweighman; standard V. miners’ agent; standard VI. Member of Parliament.” But he still describes himself as “a plain pitman.”

But my chief delight in writing this sketch of Mr. Parrott is in the fact that he is a member of my class in connection with the Westgate Church, Barnsley I. Circuit. He was converted when a few months over 20 years of age at Methly, then in the Leeds IV. Circuit. Immediately after this great change came he began his religious work as a Sunday school teacher, and one of the most interesting incidents to him, personally, of the late electoral campaign had reference to his work in the Sunday school. At the close of a meeting at Horbery, a woman wished to shake hands with him, because he was her Sunday school teacher years ago at Methly. She afterwards introduced her husband and daughters to him as her Sunday school teacher of other days. This homely incident gave him great pleasure. About two years after his conversion he began work as a local preacher, and for fourteen or sixteen years he exercised this ministry with credit to himself and profit to the people. Increasing duties connected with his position as miners’ agent left no time for proper and efficient preparation for the pulpit; hence, after much thought and not a little heartsearching, he resigned his position as local preacher. For some years he was an assistant leader of a Sunday afternoon class at Westgate.

The home life of Mr. Parrott has been a potent factor in his well-merited success. In many wise, quiet and unobtrusive ways Mrs. Parrott has proved a worthy comrade and helpmate. She has ever sought to make the home a place of rest and refreshment to body and mind. She has succeeded, and her husband confides in her and declares that he owes much of his success to her constant encouragement. The children also acknowledge their great indebtedness to her thoughtful care and kindness. Mrs. Parrott is also a member of my class. Before marriage she belonged to the Methodist Free Church, but she at once united with her husband in church fellowship, and ever since has continued a member of our Church. The wish of all their friends is that Mr. and Mrs. Parrott may live to enjoy for many years the respect and honour that have come to them.
“Go, labour on, spend and be spent,
Thy joy to do the Master’s will;
It was the way the Master went,
Shall not the servant tread it still.”

William was born to parents James, a coal miner, and Susanna.