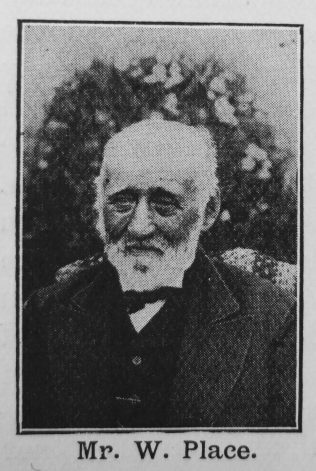 Transcription of Obituary In the Primitive Methodist Magazine by Geo. Annakin

Brother William Place, the subject of this brief sketch, began his mortal career at Balk, in the county of York, in the year 1816, and terminated at Clifton, in the same county, on Oct. 22nd, 1900, in the 84th year of his age. Of his early life or the particular circumstances of his conversion to God we know but little, save that he reached the age of manhood before this important event took place. It is said, the young lady who ultimately became his wife, and with whom he lived in the bond of happy sacred wedlock for close upon half a century, was a Christian at the time he made her acquaintance, and a member of the Wesleyan Methodist Church, at Thirsk. One Sunday night she wished him to accompany her to the chapel she attended. At first he refused. She then frankly and faithfully told him “if he would not go with her to heaven, she would not accompany him to hell.” He then went with her to the house of God, was soon after led to seek and find salvation, and became a member of the same chapel as herself. Would that all Christian young women were as wise and faithful with their ungodly lovers; it would save them a good deal of needless trouble and disgrace in their future lives. For some time after marriage they both continued members of the Wesleyan Church. About fifty years ago, however, they went to live at Marton-le-Moor, near Boroughbridge, where they came intimately into contact with our people, and for some reason we have no knowledge of, threw in their lot with us. After living there for a few years, about six-and-forty years ago they came to live at Sowerby, near Thirsk, where they again connected themselves with our Church in the latter place, and continued useful and consistent members of the same until they entered the richer fellowship of the saints above. During our brother’s connection with us as a Christian community, he is said to have lived a very exemplary Christian life, and seeking in a quiet, earnest, manly way to serve his own generation according to the will of God. As we have not known him long, we prefer to let others bear witness to his excellencies of spirit, principle, and conduct, who have had much better opportunity of forming an intelligent and correct judgment upon the subject than ourselves. The Rev. M. Reavely says: “He was so full of loving kindness that he drew us to him as the sun draws the flowers. One could not help loving him. When we were discouraged and cast down with the burden and heat of the day, his presence was like the shadow of a green tree.” With regard to him Rev. J.S. Nunn writes: “I always regarded him as a good type of an every day Christian. His conduct was a constant rebuke to the wicked, and on the other hand a continuous source of encouragement and help to all his fellow Christians.” The Rev. A. Johnson affirms: “There were certain traits of character in brother Place we do not always find in professing Christians. He was emphatically a man of peace. His soul hated dissension and discord, and especially in the Church of God. He constantly prayed for the peace and prosperity of Jerusalem, and ever manifested a loving and forgiving spirit towards all men. His greatest consolation was his Blble, and his richest enjoyment the fellowship of saints. May we meet our venerable brother where they flourish in immortal youth, in the sunless Eden above.”

The Rev. W. Haddow asserts: “When I was in Thirsk Circuit Mr. Place impressed me as a simple-minded, earnest Christian man. He was a diligent reader of the Divine Word, and I fully believe to him the words of Christ were spirit and life. On them his soul was fed and nourished, and the spiritual food partaken by him found expression in consistent Christian life and character. He was a helper of every good cause, and, when I knew him, quietly benevolent to those who were in need around him, and gave liberal help and warm sympathy to our African mission fund.” The Rev. T. Tempest bears witness: “He was a good man and a devoted Christian, and one with whom it was a real pleasure to associate. I shall never forget the happy hours I have spent with him in his home and in Divine service, for in whatever position I met him I ever found him helpful and responsive in all good things. He was consistent, faithful and constant, and between his Christian beliefs and practices there was a beautiful harmony, the one finely corresponding with the other. He was ever faithful as a friend and servant of Christ, and full of true affection and abundant labours for Zion’s good; and now that he basks in the light of eternal day it may be truthfully said of him, “He hath done what he could.” ’ During the last few years of our brother’s life on earth he passed through a good deal of physical suffering and mental perplexity, caused by the death of his beloved wife, the loss of money, and growing bodily infirmities. These, on the whole, he bore with much commendable cheerfulness and patient resignation to the will of God, as long as reason held its rightful place in his mind.

As the end drew near, however, this failed him to some extent, and the last few days he spent in this world were passed under a cloud. We feel quite sure, however, that Christ, whom he so sincerely loved and faithfully served, was with him in death as well as in life, and when the time of his departure arrived sent His angels to convey his ransomed spirit to the realms of immortal bliss and glory, where dark clouds never gather and painful losses are never experienced. After an impressive service held in the Wesleyan Chapel, attended by a large congregation of sorrowing relatives and friends, his mortal remains were committed to their last resting-place by the writer, in Sowerby Churchyard, in the midst of many sincere expressions of sympathy and respect.

Peace to his memory and rest to his dust, until the shadows all vanish, and we meet him again in the unclouded presence of God and the Lamb, is the sincere prayer of the writer.

William was baptised on 28 May 1816 at Bagby, Yorkshire (next place to Balk). His parents were John, a farmer, and Elizabeth.