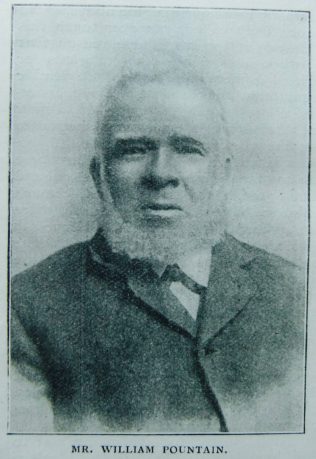 Transcription of Sketch in the Christian Messenger by E.T.S. Jones

The subject of our sketch was born at Rodgely, a small hamlet in Derbyshire, in the year 1835. His parents were hardworking people, and they trained their children, of whom William was the eldest, to habits of honesty, sobriety, and work.

Isaac Pountain, the father, was gardener to the Rev. Edward Wade, vicar of Trinity Church, Derby, and a Wesleyan local preacher in the Burton Circuit. It was his custom when “out preaching” to take young William with him. These Sunday trips were eagerly anticipated and enjoyed, and the seventeen miles walk through the country to the little wayside chapel was a fitting prelude to the “grand services” of the day. In those days the prayer meeting was considered to be the most important meeting; “speechifying and arguing” was not tolerated, and preachers were requested “to be short and to the point.”

It was in the March of 1855, when twenty years of age, that William Pountain was converted in the Primitive Methodist Chapel, Hyson Green, Nottingham, to which town he had removed nine months previously.

Three years later (1858) he came to Long Eaton, a small place of barely one thousand inhabitants, seven and a half miles from Nottingham, and in the Nottingham 1st Circuit. He obtained work at the foundry of Mr. S.J. Claye, the noted railroad-waggon builder and repairer. For 38 years he worked at the hammer and furnace, and in 1896 he retired highly esteemed and respected by both master and men for his diligent attention to his work and his upright, exemplary life.

William Pountain found at Long Eaton a small Primitive Methodist Chapel, situated in Chapel Street and a society of seventeen members. They set to work visiting the people and missioning the streets. Nearly all the time that he was not at work, viz., half-holidays, holidays, etc., this unordained minister spent in carrying the Gospel to all kinds of people, never sparing his body, mind, or pocket, and abhorring nothing so much as spiritual ease and inactivity. During the ministry of the Rev. S. Antliff the membership and quarterage were doubled, and it was found necessary to lengthen the chapel thirteen feet, raise the roof four feet, and build a small vestry.

A few years later Long Eaton was visited with a gracious outpouring of the Holy Spirit, as the result of the work of Miss Lee, an evangelist. The praying band of men and women in Chapel Street took hold of the town, and night after night for weeks people hastened to what was then known as the “Ranters’ Chapel” in order to get converted. Infidels, blasphemers, and the worst specimens of fallen humanity were “born again” and became zealous in good works and godly living.

By this time the little society had so grown, and the chapel being packed Sunday after Sunday, it was decided to build a new chapel which would accommodate the congregation and be an ornament to the rapidly growing town and Connexion. The scheme swiftly unfolded itself under the wise superintendency of the Rev. William Cutts. The people worked with a will, their religion was not all wind and steam. Some worked, some begged, all gave; and what appalled the weaker brethren of neighbouring places as an impossible task became in a very short time an accomplished fact.

The chapel cost £2,000. Towards this Mr. S.J. Claye, our friend’s old master, gave the ground and the pulpit, which altogether cost some £200.

In a short time a large schoolroom with class-rooms and vestries was built, costing £1,700, giving ample accommodation to the largest and best school in the town.

In conjunction with other societies, where the bulk of the members are employed on the railway, Long Eaton has had its periods of ebb and flow, incident to a floating population. Many have been its sorrows, on account of the parting of friends.

The society was not slow to recognise the worth and ability of one of its earnest and distinguished leaders. He was made a trustee for the new church. Apart from preaching, in which he has always delighted, his best work has been done in the class meeting. For forty years he has held the important office of class leader. His class for many years numbered sixty members. It is with great sorrow that he views the decline of class meetings. He avers that the supposed unpopularity of class meetings is due to the inefficiency of the leaders, to their want of tact and and slovenly conduct of the meetings. The chief objections that present-day members urge against the class meetings are their monotony and sameness, their lack of variety and vitality. These bad traits when found in church life should be instantly expunged and new means and methods more palatable to modern requirements should be discovered for presenting the Bread of Life, and the progress of societies should not be retarded by the mere humouring of a sentimental whim in the preservation of defunct ideas and systems.

As a preacher our friend has been a veritable giant, not altogether a giant in intellectualism, nor yet in oratorical display, but in the real and true sense of the word a preacher instrumental in the hands of God in leading scores of souls to decision for Christ. Being well read in the Scriptures, and having made Dwight’s Theology, in conjunction with other works, a special study, he spoke with power. He was an ardent admirer of Rowland Hill, following the great preacher’s career with marked appreciation. Today, while he feels his lack of education and ability to read the “signs of the times,” such is his homely presentation of the truth, in which is not a lack of humour, together with his great personality and great faith in God, that the younger, wide-awake, and better educated generation come to hear him gladly. He is highly respected and loved by all young people.

He has been delegate to District Meetings and Conference, the duties of which he honourably and satisfactorily performed.

May God hear the prayer of the Church and raise up many men who shall be strong in faith and mighty in the presentation of the truth as it is in Christ Jesus.

William was baptised on 13 February 1835 at Longford, Derbyshire. He was born at Rodsley, Derbyshire, to parents Isaac and Sarah. His mother died while he was very young and his father married Mary Fox.

William married Hannah Britton (abt1831-1869) in late 1859 in the Radford Registration District Nottinghamshire.

William married Sarah Guy, nee Burrows (abt1836-1892), a nurse, in the summer of 1882 in the Bingham Registration District, Nottinghamshire.