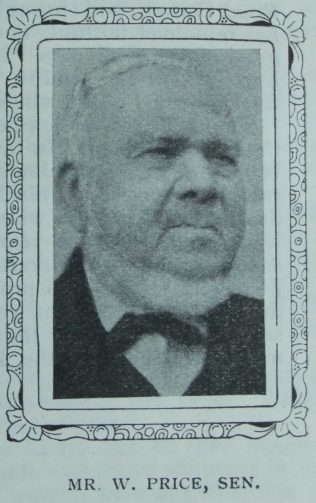 Born September 4th, 1822, at Hasbury, Mr. W. Price is still young hearted, fairly vigorous, and able to preach. His only start in letters was in the Church Sunday school. He went to work at eight and lost his father when ten years of age. At twenty he was converted. He was addicted to card-playing and other sports, but occasionally heard the Primitives who came to mission the district. One day at the card-table conscience suddenly awoke. “God struck me with conviction. I jumped up from the table, left my companions, and ran up the road crying aloud for mercy. The people gazed, but I rushed on pleading, and God saved me.” He united with our Hasbury Church.

He soon began to exhort, and was put on the plan by Rev. R. Jukes in 1847. He had an excellent voice, and laboured more abundantly than any other layman. He has lived to see his parent Circuit (Dudley) grow into five Circuits. He drew crowded congregations, and led hundreds to Jesus Christ. One Saturday, at midnight, he was praying, and meditating over his next day’s work: “Why can’t I have success?” An answer, distinct and impressive as an audible word, came: “if men will live and believe now as in the past, success will come.” And it did come.

“How do you make your sermons?” “I first find my text, then pay careful attention to the divisions, and see that they are natural and clear. Then I pray over it all, for the Spirit to bless it.”

Mr. Price is widely beloved, trying to live daily the beatitudes of Jesus, and in his calm evening is seeking to be a pattern of godliness to his numerous children and grandchildren, and to younger members of the his church. “The path of the just is as the shining light that shineth more and more unto the perfect day.”

William worked as a stone-mason.