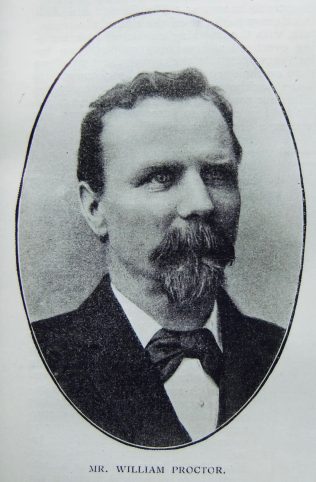 Transcription of Sketch in the Christian Messenger by Philip Nume

Mr William Proctor is a native of Sheffield, and was born on the 19th March, 1855. He was sent to St. Mary’s National Schools, but removed from them at the early age of eleven to commence work in the file trade. This occupation he followed until his seventeenth year. He then sought a change, and with that object went to sea. After gaining a certain amount of maritime experience, he returned to Sheffield and resumed his old trade. He had realised the importance of improving his general education, and he joined evening classes in various subjects. Afterwards he was able to accept an appointment as clerk in the Water Department of the Sheffield Corporation. That post he retained for seven years, when he was promoted to a collectorship under the Corporation – a position that he continues to fill.

As a boy Mr. Proctor was a scholar in our school at John Street. When twenty years of age he was converted to God. In 1887 he became a local preacher, and for sixteen years he has rendered great service to our own and other churches in that capacity. As a preacher he has won many souls for Christ, and he has long taken high rank among his brethren.

His sermons are evangelistic and practical. He ‘brings out of the treasury things old and new. His delivery is marked by spiritual farce and natural grace.

Mr. Proctor’s labours in our church have by no means been confined to the pulpit. For many years he has been distinguished as a worker amongst young men, many of whom have learnt to esteem him as “a friend indeed.”

For the last seventeen years Mr. Proctor has been engaged as instructor in phonography at the Church of England Educational Institute in Sheffield, and during that period has had under his charge at the Institute and elsewhere a very large number of pupils – so large at times that he has found it necessary to enlist the assistance of his son – who is also a phonographer. His own knowledge of the system was acquired somewhat later in life than is the rule with most phonographers, especially at the present day.

It was not until his twenty-eighth year that, after a career that had been of a varied character, he, for the first time, took up the subject and entered upon the study. It happened one day that he noticed in the hands of an acquaintance a copy of a strange periodical – one of the now familiar lithographed phonographic magazines, less generally known then than in the present year of grace. His friend was reading its contents, and a little inquiry elicited the fact that it was written in Pitman’s Shorthand. If his friend could read those characters, there was no reason why he should not also gain enough skill to read them. With this reflection came the desire to learn, text-books were purchased, and with study and practice sufficient knowledge was acquired of the new accomplishment to secure in a short time the “theory certificate” granted in those days. The certificate was received on 19th June, 1866. Other certificates have been won since. These include a speed certificate at the rate of 120 words a minute awarded after examination on 17th April, 1899, Pitman’s full certificate dated 26th April in the same year, and Pitman’s certificate of Registration as a qualified teacher of Phonography (1st June, 1899).

Soon after obtaining his Theory certificate in 1886, Mr. Proctor began the work of teaching. He conducted classes at the Springfield Board School as well as at the Church of England Educational Institute. For two years he gave instruction to students in the same subject at Herr Liebnow’s “School of Languages” in Sheffield; and at the St. Matthias National Schools in that town he conducted the classes in shorthand for about three years. His appointments at the two last-named institutions he found it impossible to retain when he obtained a clerkship under the Sheffield Corporation Water Department, which involved new demands on this time. He accordingly resigned his connection with the two schools mentioned, and confined his efforts as shorthand instructor to the growing classes at the Church of England Educational Institute.

Mr. Proctor was for a short time Vice-Chairman of the Sheffield District of the National Phonographic Society. This was in the year 1892, when various branches of the Society had sprung into existence, which, like the branch at Sheffield, did not enjoy very long life. Since then Mr. Proctor has found his work in various other spheres too exacting to permit him to take part in the operations of any of the organisations among phonographic teachers.

Mr. Proctor is an enthusiastic advocate of the Temperance cause, and is honorary lecturer to the Sheffield Band of Hope Union.

He is a skilful and ready speaker, and a good elocutionist. He enjoys a wide reputation as a public reciter, many of his recitations being compositions from his own pen. In addition to this accomplishment he possesses an excellent voice and can attract an audience by his singing. Another talent, less common, which he has developed to a high pitch of excellence, is the art of rapid drawing with chalk and charcoal. With these varied powers it will be understood that he possesses most of the qualities that go to make up the successful public entertainer. He is the author of a number of literary productions in prose and verse which have appeared in print. Some of these have been set to music, and have obtained no little popularity among the audiences for whose benefit they were intended.

Mr. Proctor has lived a strenuous and noble life, and he has achieved many successes; however, we anticipate for him further distinction, and many years of growing usefulness.

William died in the summer of 1933 at Sheffield, Yorkshire.