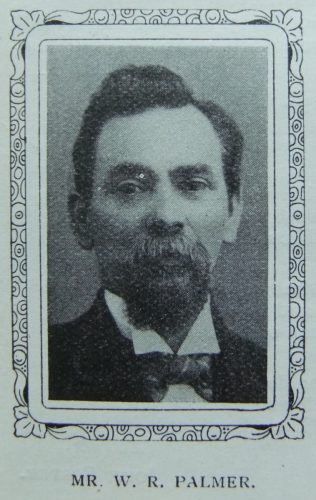 Mr. William R. Palmer was born close to our old Lakenham Church in 1849. His parents attended here for a short time, but removed to the other side of the city and ceased to attend any place of worship. When sixteen years of age our friend was induced to attend the opening of the Dereham Road Chapel, and at some revival services there he gave himself to Christ. In 1868 he was placed upon the plan, and has been an active local preacher for thirty-nine years. With thirty places, many of them a dozen miles distant and with ten or twelve appointments a quarter, this was no sinecure. The people delight to hear him and the plan-makers get many requests for his services. Superintendent of the Sunday school for many years, and leader of a young people’s class of sixty members, it goes without saying that he is deeply interested in the young life of the Church. He has been four times a delegate to district meeting and once to Conference. His home is a nursery of the Church and all his children are members with us, useful workers, and some of them holding responsible offices. Singularly shy and unobtrusive Mr. Palmer is one whom the Church delights to honour. Held by the Circuit in the highest esteem he is honoured and loved by all. As a workman he needeth not to be ashamed and Primitive Methodism owes him much.

William was born in 1849 at Lakenham, Norwich, Norfolk, to parents George and Mary Ann. George was a box maker, an occupation that William also followed.