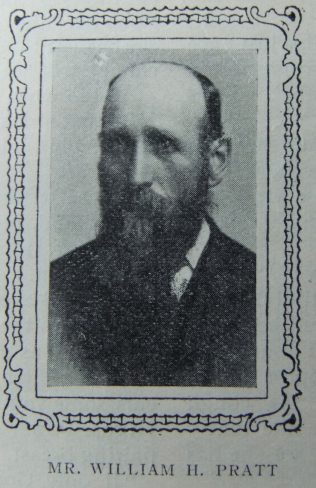 Mr. William H. Pratt stands out prominently in the village life of Hickling on the Martham Circuit, and is recognised as a leader of great influence, fair intelligence, and pure character. Born at Hickling, March 3rd, 1854.

In the spring of 1876, one of fine revivals of grace began in the village church. Mr. Pratt was one of the first fruits of that revival and has never lost his association nor ceased to hold fellowship with our church. He received his first class ticket of membership from the late Rev. James Jackson in May, 1876. His name was put on the plan of Gt. Yarmouth Circuit (of which Martham Circuit was part) as an exhorter in January 1878; was raised to full plan in 1879. He has identified himself with all the interests of this village church and village station. He is a trustee and laid the foundation stone of the new building in the name of the trustees.

For many years he filled the positions of class leader, society steward, and his name is on the plan as one of the Circuit stewards. In the village political life he is a true Liberal. An active manager of the day school for twenty years, a member of the parish council, and for the past ten years has been chairman of the council. Mr Pratt is a most acceptable preacher, thoughtful, interesting, and sure.

He enjoys a good sermon – is, in fact, a sermon taster, delighting to hear the great men. He is a loyal member of the primitive Methodist Church, and a regular worshipper. He not only attends the service but takes his part in the service. He, with Mrs. Pratt, and large family, are all in Christian fellowship with our church. The parents have made great efforts for their children, who are all doing well.

William was baptised on 8 March 1854 at Yarmouth, Norfolk. His parents were Robert, a farmer, and Rebecca.

William is described in the 1881 and 1891 census returns as an agricultural labourer. Subsequently he is recorded as a farmer.

William’s death was registered in the first quarter of 1934 in the Yarmouth Registration District, Norfolk.

Note: Census returns identify only William Watts Pratt born in 1854 and living at Hickling. The middle initial published in the “Messenger” is therefore assumed to be a typographical error.