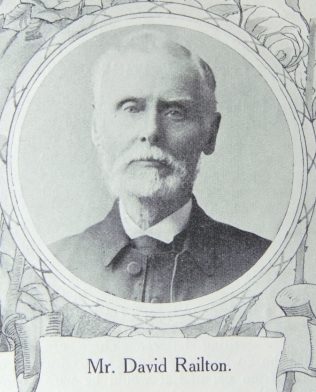 Mr. Railton has a singular and honourable record in the Driffield Circuit. For forty-two years he has held the office of Circuit Steward. Successive ministers have by letter testified to his efficiency and kindness. He has been superintendent of the Sunday School fifty-one years, class leader forty-eight, secretary of Trust Estate forty-one, and seat-letter forty-three years. For twenty-one years he has been the Hull District Orphanage treasurer. Outside our own Church he has held various important positions for a number of years. He is scarcely ever absent from a meeting of any kind at George Street Church or School. He takes a deep interest in everything that makes for the spiritual well-being and prosperity of the Circuit, and has been a generous contributor to the funds. He is a believer in systematic and proportionate giving. He is a good man and widely respected in town and Circuit.