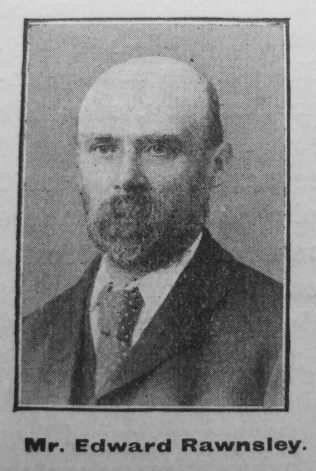 Transcription of Obituary in the Primitive Methodist Magazine by J. Wilkinson

The Bradford Second Circuit has sustained a great loss in the decease of our dear brother Rawnsley, who for over half a century had been closely connected with the work of the Church at Great Horton and Dirkhill. He knew by experience the meaning of hardship. In early youth he was left the mainstay of his widowed mother and a large family. His duty to his mother and to the rest of the family he discharged with complete devotion and great delight. God marvellously helped him to rise in the world, until he stood at the head of a prosperous business. He began his religious work as a Band of Hope secretary. His interest in temperance work never flagged even to the end of his days. As a Sunday school teacher he rendered great service to the Church. He also took a great interest in the psalmody of the sanctuary, and was a member of the choir at Great Horton for thirty years, while for twenty years he was choirmaster at Dirkhill. Some twenty years ago, when Great Horton Church started a mission at Dirkhill and deputed several of their members to work it, Mr. Rawnsley was appointed leader of the new enterprise. Under his generalship the mission has always done well. Mr. Rawnsley being a man of strong and striking personality, his influence in the circuit was great. As a mark of respect he was presented last Christmas with a beautiful illuminated address by the Dirkhill friends, and it is evidence of the Circuit’s confidence in him that he was circuit steward at the time of his death. He was a hard worker, with a somewhat rugged exterior, but a true heart and kindly disposition. His devotion as a husband and father can only be understood by those who knew him intimately, and we cannot wish anything better for the four sons and three daughters than that they may follow in his steps. For a few years he had been in failing health, yet the end came somewhat suddenly on September 23rd, 1903, just as he had entered upon his 62nd year. The interment on September 25th was largely attended, many ministers and prominent laymen of the District being present, as well as representatives of other organisations in the city. The service in our Dirkhill Church was choral, conducted by Rev. J. Harding (superintendent minister), the address being delivered by the late superintendent, Rev. John Wilkinson, of Halifax – the Revs. J. Jopling, H. Cook, F.E. Heape, F.W. Brett, E.W. Gibson, and E. Lacey taking part. On Sunday morning last, a memorial sermon was preached by Rev. J. Harding. “Gone, but not forgotten.”

Edward was born in 1842 at Great Horton, Bradford. His mother was Hannah.