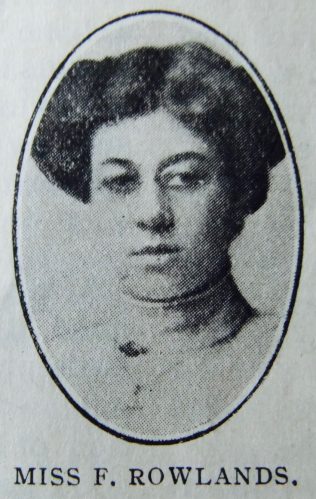 THE subject of this sketch was a native of Plymouth, where she died Sept. 17th, 1914, at the age of twenty-one. From early childhood until her death she was a member of the Stoke Sunday School, Devonport. She became a decided Christian when quite young, and in her own church and locality she was highly respected and much beloved. As a Sunday school teacher and Christian Endeavourer she was devout, regular, and efficient.

For several years she was the organist in school and church, and also a persistent missionary collector. About two years ago, however, her health failed, and she was gradually compelled to drop one activity after another. Every effort was made by her parents for the recovery of her strength, but without avail.

In March, 1914, she bravely took part in a Sale of Work, although her weakness was manifest. During the early summer she appeared to gain strength, but as the autumn approached she sank once more, and passed away in perfect peace. The chapel was crowded for her funeral, which was conducted by the Revs. Wilson Eccles and Walter Yeomans, while the large, reverent crowd in the cemetery was a remarkable sight in memory of so young a person.

Without much travel or wide scope for action, her life showed what may be accomplished for Christ and the Church by quiet devotion and faithful plodding service.

Her parents and sister are all of them earnest church workers, and they have the joy of knowing that their loved one did much and did it well.

Florence was born in 1893 at Plymouth, Devon, to parents Samuel and Bessie. Samuel worked for a wine merchant.

The 1911 census identifies that Florence worked as a boot machinist.