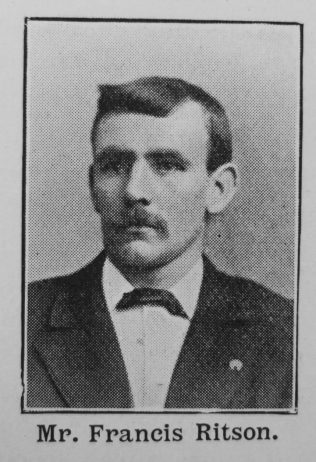 Transcription of Obituary In the Primitive Methodist Magazine by M. Johnson

Francis Ritson was the son of Francis and Mary Ritson, and was born at Usworth Colliery, in the county of Durham, on the 19th of October, 1867. His mother was a member of our Church, and exerted the greatest influence she possessed over him for his moral and spiritual benefit.

His early life resembled that of most village lads – school, play, and then work. From his infancy a scholar in the Sunday School, it was not till his nineteenth year that he became concerned about his eternal welfare. The family was then living at Broomhill, Northumberland. A series of evangelistic services was being conducted by the late Mr. Cawood. The meetings were continued for three weeks, and quite a large number decided for Christ. Francis was deeply impressed, but did not yield until the last service. He was afraid that he would not be able “to stand,” and that fear kept him back so long. Having made the decision, he manifested that tenacity of spirit which characterised him all through life. He at once joined the Church. Shortly after this the family removed to Croxdale, in the Spennymoor circuit, and it was there that he became a Sunday School teacher, a work in which he took great delight.

In February, 1892, he was united in marriage to Margaret Ramshaw, who, with her three daughters, is left to mourn his loss. The death of his little boy was a great grief to him, and seemed to give him a still greater interest and affection for the children in his class. His home life was a pleasant and peaceful one, his fine qualities of heart making him almost, an ideal husband and father. In 1895 they removed to Blyth, and he at once identified himself with our Cowpen Quay Church. Into all its activities he threw himself with characteristic energy. At the time of his death he was one of the teachers of the infant class, assistant leader of both the Christian Endeavour and the choir, a member of the chapel committee, and one of the seat letters. There was a sense in which it might have been said that he lived for his Church. If work within his capacity was to be done, he did it heartily as “unto the Lord.” Naturally of a quiet, peaceable, and retiring disposition, he never sought place or prominence. To be good and to be useful ever seemed to be his aim. In the Y.P.S.C.E. meetings he usually sat near the door welcoming the members, and providing them with hymn books: and on these occasions he was accustomed to say, “I had rather be a doorkeeper in the house of the Lord than a dweller in the tents of wickedness.” As a friend he was true, reliable, helpful. Slow in forming friendships, yet, when once formed, they were lasting. Kindly in his relations with others, he was deeply loved in return. Two features stood out prominently in his Christian life – his yearning after goodness and his passion for work. “Make me pure,” he would cry, “and make me useful.” He was willing, at all times, to render service for the Church and for his friends. There is more than one instance of young men abandoning a worldly life and becoming members of the C.E. because of his advice and example. He walked before God, and was conscious of His presence and help. A few days before his death, he had a piece of critical and dangerous work to do, and said to the boy who was with him, “This is dangerous work, let us before starting it say our prayers,” and they knelt down, and committed themselves to the care of God.

The end came suddenly and unexpectedly. On the 5th of December, 1900, he went to work in his usual health and spirits. While drawing timber in the pit, a heavy fall of stone came down upon him. After the space of half an hour he was extricated from the debris, but life was extinct. “Many fall as sudden,” sings Young, “ few as safe.” His death caused a sensation in the neighbourhood, and brought grief to many a heart. Seldom has the Cowpen Quay church and school been so deeply stirred. Devout men carried him to his burial, the funeral being largely attended. An impressive service was held, and many eyes wept that day that are “unused to the melting mood.” The Rev. Matthew Johnson improved his death to what the local paper, which gave a full report of the service, called “an exceedingly large congregation.” His place will be difficult to fill. Jonathan’s words to David were applicable to him, “Thou shalt be missed, for thy seat will be empty.” His death is another clamant call to rededication that the work of God may be sustained and extended.

Francis was baptised on 23 October 1867. His father, Francis, was a miner.

Census returns give the following occupations for Francis.

At the time of his death Francis was a colliery deputy overman. He died at Crofton Mill Pit, Cowpen Colliery, Northumberland.