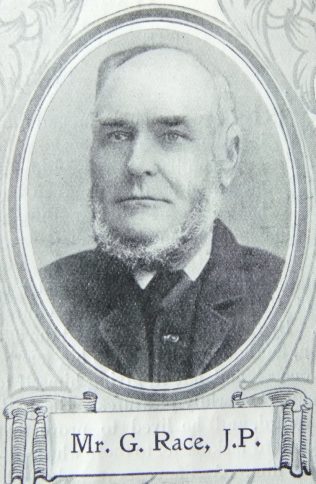 The Senior Steward of the Westgate Circuit is a man of unusual gifts and acquirements. He has throughout life been a great reader and a close student of nature. He is passionately devoted to his native dale, and has an extensive knowledge of its geological formations and botanical products. His father was a king among men, and helped to give Primitive Methodism its strong position in Weardale. In addition to Circuit Chancellor Mr. Race fills the position of local preacher and class leader.

Though over seventy-four years of age he is wonderfully vigorous, and his mental alertness is undiminished. He has all the best characteristics of the sturdy dalesman, and is possessed of great stores of knowledge of the most varied character.

He has filled many public offices, including that of County Councillor for many years; and twelve months ago he was made a Justice of the Peace. Everywhere in Weardale the name of Race is held in profoundest respect.

George was born abt1834 at Stanhope, Co. Durham, to parents George Race and Martha Coultard. George was a grocer and draper.

Census returns suggest that George was brought up by his maternal grandmother.

George was involved in the erection of a number of PM Chapels, e.g. Westgate PM Chapel, and Wolsingham.