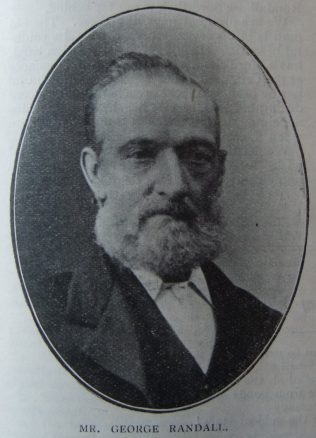 Primitive Methodism can ill afford to be without men of the type of George Randall. He is one of the old school, a link that joins us to the best past of our Church.

We are possessed to-day for more cultured servants; we certainly have none more Christly. We need the one; we must have the other. If goodness be greatness, then George Randall stands high. He is a really good man.

We have wondered whether it were possible to live and work amongst a people with universal favour. Where no ill is spoken, we often think no good is attempted.

We have yet to hear the first unkind word about our old friend. Not that he has been idle. Few men in our Church have done and are doing more than George Randall. It is a delight to know him. It is an inspiration to be associated with him.

Like many of God’s good men, George Randall was born of very lowly parentage. His birthplace was in the small village of Backham, Norfolk. Here on the 30 April 1837, our friend was born. As a boy he was possessed of a violent temper. He was a terror to the boys of the village.

We can scarcely conceive of this fine, chaste life, as we know it to-day, finding its early expression in violence. Mr. Randall would soon explain the change: “By the grace of God I am what I am.”

His parents were farm-hands. There was a large family consisting of eight children. When we remember the weekly wage only amounted to eight or nine shillings, out of which rent, firing, food and clothing had to be provided, we wonder how it was possible to “pull through” at all. What struggles, what anxieties there must have been! Of luxuries they knew not.

The boy George was born at an unfortunate time for his education. He was the fourth child. The others had been taught a little, but the family responsibilities were so great at George’s coming, that he had to grow up with his education entirely neglected. Those who came after did better, for the older ones were now able to earn a little. George started work when he was seven years old. He was engaged as a farmyard boy for 2s, per week. How rich he must have felt at the end of his first week!

About the time of the Crimean War, when the father and three brothers were working, after the bill for flour was paid – flour then being 4s. a stone – the family were sometimes left with one-and-fourpence with which to provide all other necessities. Good old times! May they never return!

The lad kept at farm work until he was able, at the age of nineteen, to hire for five pounds for the  year.

It was at this time that a wonderful revival broke out in the village of about thirty houses. So genuine was the work, that the Church gained thirty-eight members by this move.

George Randall was one of the converts. He promised well. He was a trophy. He was not without his besetting sins. Dancing was his temptation. On one occasion he yielded, and was next day called a fool by an old member of the Church. This knocked the young man down for twelve months. He, however, got back again to Church, to go out again no more for ever.

At the age of twenty-five Mr. Randall married. His wife proved a great help to him by reading to him the Scrioptures. Two years later the Quarterly meeting, without his knowledge, put him on the plan. This was one of the hardest trials of his life. He could not read; how was he to preach? The situation so distressed him, that before the plan had come out, on which he had eight appointments, he had gone to Yarmouth, taken the boat for Newcastle, and got work at Howdon-on-Tyne. He was only away seven weeks when he took ill, and was glad to get back home. Truly we have here a MODERN JONAH.

He reached home just before his last appointment. He was pressed to take this to determine if God desired him for the work. He had heard about Pentecost. He therefore chose this subject. For those awfully long four minutes he held forth. The audience was moved. So marvellous was the effort, that it was recognised by all, “the hand of the Lord was upon him.” Some time afterwards, in the quietude of his own meditations, he felt a great blessing flood his soul. He says: “I was full of heaven.” That blessing sealed him for the rest of his life. Heaven became to him “no far-away benison, but a glory begun below.” His experiences henceforth are those of a man who walks with God. God to him is the greatest reality of his life. He lives in close touch with the Divine. What a man of prayer! What mighty faith he has! What a quiet rebuke his life is to the doubting, trembling soul! He knows his Lord, and you know it.

Mr. Randall had much preaching in the beginning. He was planned regularly eight or nine Sundays a quarter, often having to walk twenty-two miles and be at work very early the next morning. He soon became a “marked” man. Mr. Joseph Arch visited his place to promote a union among the hinds. Mr. Randall spoke on behalf of the men. His speech appeared in the newspapers. When he needed employment afterwards, no farmer would engage him. He had now to get a day’s work as best he could. He was naturally unsettled. For a while he could not decide whether to move north or emigrate to America. Eventually it was decided to come north. Consequently, in 1873, he and his wife and children landed at Cambois (Blyth), and for seventeen years he was engaged as the colliery horse-keeper.

For twelve months he did not let it be known he was a local preacher. He says he so felt his ignorance amongst the intelligent men of the north. His powers, however could not be hid. He had to resume his preaching, and few local preachers have a better record.

When in 1890 he and the family moved to Netherton, the chapel was closed. This did not suit George. He sought and found three Primitive Methodists meeting with another Church. They arranged to open the old chapel. The first convert was Mr. Randall’s eldest son, who is now a choirmaster, leader, local preacher, and councillor. In twelve months there was a membership of twenty.

In 1894 Mr. Randall moved to Guide Post (Ashington), and since then he and his family have rendered excellent service to the Church and Circuit. Our old friend has occasionally been involved in  special evangelistic work. Numbers have been converted through his agency. It was a great joy to hear Rev. Wm. Younger, of Harrogate, state at a public meeting at Morpeth recently, at which Mr. Randall was present, that he was the instrument of his conversion. So recently as February, 1905, Mr. Randall conducted a most successful mission in our Circuit chapel (Ashington), which lasted three weeks. The young people flocked around him. They love the old man.

In May this year he celebrated his JUBILEE OF MEMBERSHIP.

Mr. Randall’s wife did not live long. In 1867 he was married again to Blanche Barnes. For nearly forty years “Blanche” has travelled with him. Their lot has not been easy. They have had to face poverty and privation, sickness and sorrow. They have has a struggle right through, but they have joyfully helped each other to bear the burden. What a tribute Mr. randall has to pay to the gracious and helpful influence of his wife! His home in the darkest days has been a heaven. Christ has ever been supreme. It has been, and is, a House of Prayer. As you step over the threshold to-day, you feel you are entering the House of God.

Mr. Randall has done much to brighten the homes of others. What a visitor he has always been! He has a special aptitude for this. Sometimes he has scarcely a night in the week at home. He is continually sought to visit the sick and pray with the dying. He loves this work even more than preaching.

It is intended to build a new chapel soon at Guide Post. Mr. Randall, feeling keenly interested in the undertaking, is going about the district lecturing on his life. What he realizes in this way goes to the New Building Fund. When the stones are laid, it will be found that, although unable to do much from their own financial resources, Mr. and Mrs. Randall are nevertheless not far behind.

We are proud of men like these. The old man is in his seventieth year, yet quite youthful in spirit. He still leads a mission band, has a large class, and is regular in attendance at the C.E. and other meetings. So dutiful has he been as a local preacher, that only once during his long service has he actually “disappointed.” That was a Sunday afternoon when the rain was falling heavily.

We wish for our old friends every good wish. We would have them stay with us yet many years. God bless them!

George was born at West Beckham, Norfolk, to parents Robert and Hannah.

I have not been able to identify the first wife of George.