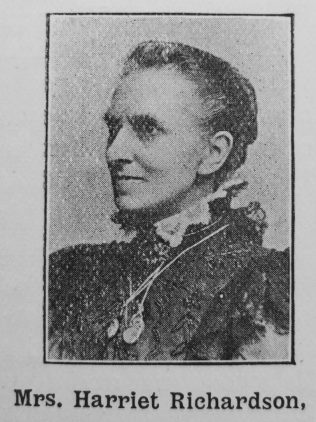 Transcription of Obituary in the Primitive Methodist Magazine by John Wilson

Mrs. Richardson of South Cave, East Yorkshire, was born in the parish of North Cave, on August 9th, 1841. Her parents were members of the Wesleyan Church, and being very pious, brought up their children amidst a spiritual atmosphere. This in all probability accounts for the deep spiritual life lived for many years by the subject of this memoir.

She was possessed of gifts and graces which, in the nature of things, almost compelled attention to the good and useful work in which she delighted to engage, and hence for many years she was remarkably useful. Testimony concerning this has come from many, from which the following may be cited:-

A Primitive Methodist minister writes: “Mrs, Richardson was certainly an exceptional woman in many respects, being intelligent, affectionate, good, and especially companionable.”

A Presbyterian minister writes: “I more than respected her. I was deeply indebted to her. Of all the friends whose advice has been a help to me, it was she who uttered the words which gave me spiritual peace.”

A minister of the United Methodist Free Church writes: “Twenty-five years ago she advised me to aspire after goodness rather than to be learned or clever.”

Another person writes: “My memory takes me back to the time when in some revival services she led me to the penitent form and spoke to me of Jesus.”

While doing good in many ways, she always took special interest in temperance work. Every person whose object was to enhance temperance principles in her neighbourhood found in her a most willing and influential co-worker. From 1872 to the end of her life she was a most loyal member of the Primitive Methodist Connexion, and delighted in whatever had to do with the welfare of our Church.

Her home life appears to have been particularly happy. From 1870, when she and her husband became united in holy wedlock, for thirty-two years there seems to have been such similarity in taste and purpose as makes home life to reach the ideal condition. This fact enables very many to deeply sympathise with the grief-stricken husband, and to pray that the special blessing of the “Comforting God” may he with him.

Harriet was born to parents John Pearson, a carpenter, and Elizabeth.

She married William Richardson (b1844) in the summer of 1870 in the Howden Registration district, Yorkshire.

Harriet died in the summer of 1902 at South Cave.