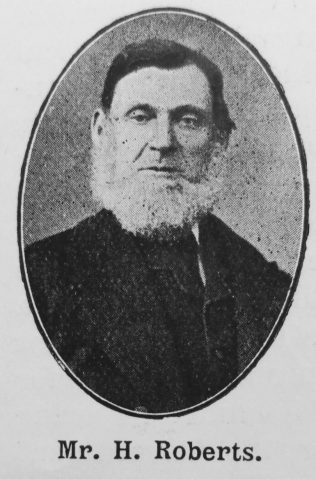 Transcription of Obituary in the Primitive Methodist Magazine by Thos. Price

By the death of Mr. Healen Roberts, of the Colnbrook Circuit, which took place on November 16th, 1901, the Connexion has lost one of its most loyal, generous, and devoted sons, and what is rare now, one of the links connecting the present with the early days of its history, he having been contemporary with Hugh Bourne, and having taken part in services along with him.

Healen Roberts was born at Great Marlow in June 1818. His parents were in humble circumstances, and his early advantages were therefore very limited. At the age of twelve years he was apprenticed in an adjoining village. His first religious impressions were received in the Poyle Congregational Sunday School, when he was nearing the end of his apprenticeship. Our missionaries visited the neighbourhood, and their lively singing and earnest preaching attracted his attention, and through their instrumentality he was brought to Christ. He at once joined the Society, soon gave evidence of considerable ability for service, and in a short time became an accredited and very successful local preacher.

In 1837 he returned to his native town and became united in marriage to one who, through her life, was a faithful wife and devoted mother. In 1841 he came to live permanently at Colnbrook, where he at once opened his house for preaching; and under the blessing of God, much good was done. A larger place was soon needed, and a small chapel was built in his garden, which a little later was superseded by a good substantial building in the centre of the town, which has since been twice enlarged.

On the occasion of the jubilee of his connection with Primitive Methodism two houses adjoining the chapel were purchased, one of which was converted into a Sunday School, and the other constituted a Jubilee Memorial. The whole cost of the undertaking being raised at the time in commemoration of the event.

In a short time Staines, Chertsey, Addlestone, and Shepperton were missioned, and chapels and schools built. A new chapel was also erected at Uxbridge, and each chapel was placed in easy circumstances. After a few years the Station was divided, Colnbrook with adjacent places being formed into an independent Circuit, while Chertsey, Addlestone and Shepperton were formed into a new mission.

During this time Mr. Roberts was the mainstay of the Station officially, financially, and otherwise, becoming a trustee for each chapel (except one), and faithfully and generously supporting the ministers of the time in every effort for extension and development.

His devotion to the cause, his kindly nature, his unassuming deportment, and strong-faith in God created sympathy and confidence and gave him great influence, not only with his brethren, but also with the outside public.

Having prospered in business and gained a fairly good social position, he was able to take the lead both in generosity and energetic service.

As a man, he was calm, thoughtful and cautious, of sound judgment, strong commonsense and very conscientious. Principle was to him as dear as life, and yet no man could have greater respect for the feelings and views of others. If he lacked somewhat the outward polish, he certainly possessed, in a very high degree, the true spirit of a Christian gentleman.

As a local preacher he was thoughtful and impressive, and was often cheered by visible results. During the earlier part of his time, for many years, he walked to and from his appointments, on an average, more than 150 miles a quarter, and preached, generally three times on the Sunday. It can be truly said of him, that he was “in labours more abundant.”

And, in commen with others of those early days, he had to suffer persecution – often being the butt of rotten eggs and other missives.

Once, while preaching at Staines, in the open air, he was taken to the police-station and given in charge, but, when afterwards discharged with a caution, he returned to his post and completed the service.

He was highly respected in the neighbourhood in which he lived, being ever ready with practical sympathy and support for every Institution and movement for the improvement of the neighbourhood and the good of the people.

He espoused the cause of temperance at the time of his conversion, and was during the whole of his after-life a consistent example and enthusiastic advocate of its principles. His children and children’s children are life abstainers, and his two surviving sons – Samuel and Healen – are local preachers of many years standing, and are worthily treading in the footsteps of their father. May his mantle ever rest upon them.

He has gone to his higher service. Earth is poorer, but heaven is richer. His memory is fragrant and inspiring. His death was triumphant. His last words, after being asked if it was well with him in view of his approaching dissolution were: “Oh, yes! bless the Lord! Hallelujah! ”

The funeral was largely attended, and very impressive (all the bearers were local preachers) several ministers and laymen of his district being present, besides a host of local preachers and members of the Circuit, and friends representing the churches in the neighbourhood, as well as townspeople generally, all testifying to the high esteem in which our brother was held.