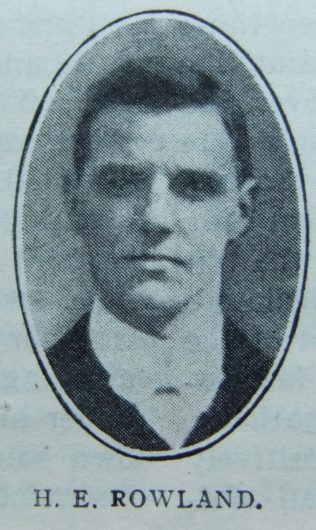 HERBERT EWART ROWLAND, of Birkenhead, was born October 23rd, 1888, and on March 29th, 1913, he was called home. Into a little over twenty-four years he crowded much high-toned, abiding work. True his days were few, but in goodness they were intense. Grateful hearts speak in tender tones of him and of his work in Mount Tabor Church, Birkenhead.

In many avenues of service he gave practical expression of his deep love for his Lord.

Especially as a young local preacher did he serve, a service so acceptable that great hopes were entertained for coming days.

For some thirteen months he lived at Rugby, and on that station in all weathers, he journeyed willingly to the farthest places that he might declare the evangel of love.

He had accepted an appointment as hired local preacher at Leamington, but upon this work, owing to failing health, he was not privileged to enter. His hope was to enter the ministry of our Church, but God called him to the higher service of the Homeland. He was gifted and he was good. He was a winsome, lovable personality. How kindly he was! Bright and cheery; it was a benediction to know him. On Sunday, April 13th, 1913, the writer conducted an “In Memoriam ” service in Mount Tabor Church.

Herbert was born at Chester, Cheshire, to parents Thomas and Isabella. Thomas was an assurance superintendent.

The 1911 census records Herbert working as a draughtsman.