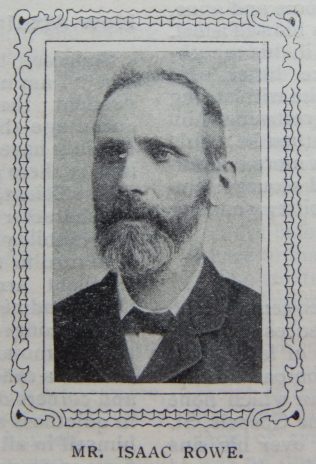 Mr. Isaac Rowe in the teens of years has been the Society Steward of Ninnis Bridge, in St Ives Circuit. There our pretty chapel nestles at the foot of Trencrom Hill, from whose towering heights there is a magnificent view of the English Channel, with Mounts Bay and Penzance, and also of the Bristol Channel, with St Ives Bay and town, and the coast as far as Newquay and Trevose head. On Trencrom the ancient Britons had their Temple and Fort, memorials of which still remain in the huge rocks. Now it is the Mow Cop of West Cornwall, where last summer St Ives and Penzance Circuits united to hold a Centenary camp meeting; and every year its camp meeting attracts crowds to hear the veteran George Quick and other Boanerges declare the Word of Life. Mr. Rowe was born 62 years ago. He has been a member 33 years, having been converted in Ninnis Bridge Chapel. He soon became a teacher in the Sunday school; and for over a dozen years he has been Superintendent, Class Leader, Trust Treasurer, and frequently has had to take the post of the preacher. He is a typical product and pillar of that village Primitive Methodism that has contributed much to make our church robust and sturdy. He has helped to lead many young men and maidens to Christ, who have gone forth to enrich the churches in the big towns, while many have emigrated to witness for Christ in other lands. Mr. Rowe remains, always at his post, doing “whatsoever his hand finds to do with his might.” His triumph and supreme joy is in a glorious Cornish Revival. His life has not been without its vicissitudes; and he has sometimes been called to kiss the rod, but his faith has cried “Though He slay me yet will I trust in Him.” To the hospitality of his home, all preachers, ministerial and lay, can testify. That he may long be spared to serve the Church he loves so well is our earnest prayer.

Isaac was born at Lelant, nr St Ives, Cornwall, to parents John and Alice. John was a farmer. Isaac was baptised on 24 May 1846 at Uny-Lelant, Cornwall.

Isaac married Mary Jane Martin (abt1847-1882) in the spring of 1869 in the Penzance Registration District. Census returns identify six children.