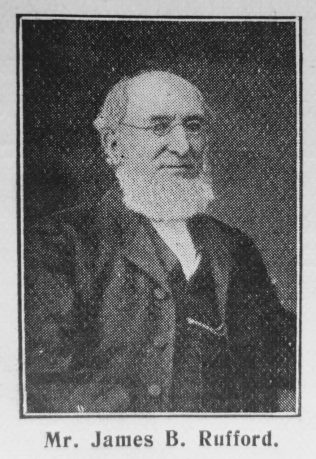 Transcription of Obituary In the Primitive Methodist Magazine by Thomas Whittaker

On Monday, August 20th, 1900, Mr. J.B. Rufford, of the Hull Fifth Circuit, in the eightieth year of his age exchanged mortality for life. He became a member of our Society more than fifty years ago and was associated with the beginnings of the cause at Great Thornton Street, when Primitive Methodism was comparatively feeble in the city. Thornton Street, now the head of the Hull Fourth Circuit, was the second venture at Chapel building of much account in Hull by the denomination. Mr. Rufford entered heartily into all the activities of the cause, and was ready for any and every good work that came to hand. When Bourne Chapel, Anlaby Road, now the head of Fifth Circuit, was built in 1871, he allied himself with its interests, and continued his connection therewith to the end of his life, of which Chapel he was an officer and trustee. He was for many years a successful and painstaking class leader. He was a popular local preacher, often in demand for school and other anniversaries in neighbouring Circuits. He had a bright and happy presence that added to his welcome to our pulpits and the homes of our people. He inaugurated the Sunday evening services at the Western Park Gates of the city, still continued with good results. We think of him at, our sacramental feasts at Bourne. Many years ago he presented to the trustees their beautiful communion service. In the civic life of the city he took a somewhat prominent position as Chairman of Ward Associations, Guardian of the Poor, etc.

In the sixties he fought the battle of the working classes on a question of the burial of their dead, and succeeded in winning for them, for their departed, a quiet grave at a moderate cost. He was the first Chairman of the late James Clay, Esq, who for a number of years, was one of the representatives of Hull in the House of Commons. He declined all overtures to enter the Town Council, though he introduced to public life more than one or two of the most useful Aldermen and Councillors of the present time.

Mr. Rufford was a good man, perfectly reliable, true to his convictions, and he never spoke with two voices. Those who knew him best, the best knew his worth. Everything that touched the honour and wellbeing of the Connexion touched him. He knew William Clowes. He saw Primitive Methodism in Hull grow from a small beginning to its present proportions, with fourteen large Chapels, a number of smaller ones and sixteen ministers. He has some claim to the honourable position of a place among the makers of Primitive Methodism in Hull. He died as he had lived, calmly trusting in the Lord Jesus Christ as his sure hope of eternal life.

James was born on 2 May 1821. James was baptised on 1 June 1821 at St. Mary, Kingston upon Hull, Yorkshire. His parents were William Brown Rufford, a sailor, and Elizabeth.