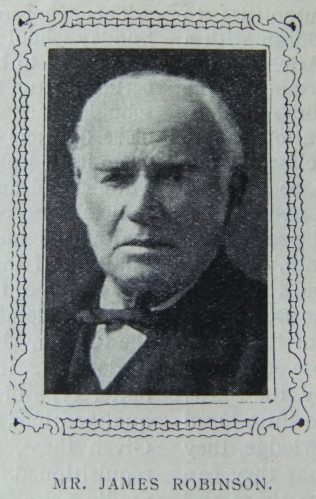 JAMES ROBINSON, of Horton, in the Wem Circuit, was born in Prees Heath in the county of Salop, sixty years ago. His parents were religious and were Wesleyans. Thus James was favoured with a Christian home and he had a religious training. When about twenty-four years old, there broke out a mighty revival of religion at Tilstock, which caused a big sensation in the neighbourhood. People were saved night after night. James heard men talk of it and he was curious to see and hear for himself. He went, never once thinking that he would be converted, but the unexpected happened. The Holy Spirit convinced him of his sin, and he cried out for mercy. He there and then received the inward witness that he was born of God, and he was enjoyed ever since the happy consciousness of sins forgiven.

In the year 1865 he went to reside in Newtown, and joined our Society at Northwood, and was unanimously elected Class Leader, and for the last twenty years he has rendered splendid and faithful service.

He is a grand personality, being quiet, genial, conscientious, kind, humble and good. Rich in experience and mellow in character, he believes in the supremacy and value of personal religion. To him, religion is the life of God lived and enjoyed in the soul. He is an ardent believer in the Class Meeting, indeed to him there is no other service equal to it. He is pained in heart to see the neglect of it, and he hopes and he prays sincerely that the day may never come in our great Church when it becomes obsolete.

To know him is to love him. May he be spared many more years to serve his Church.

James was born in 1840 to parents Edward and Margaret. Edward worked the land.

James was a farmer.

Note: Census returns give James birth place as Whitchurch, Shropshire, and he was ten years older than the sketch suggests.