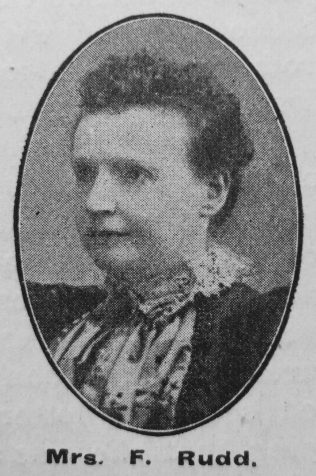 Transcription of Obituary in the Primitive Methodist Magazine by F. Rudd

Jessamine, the beloved wife of Rev. F. Rudd, ascended to the many-mansioned home on the morning of Feb. 15th, 1904. To her the rest was welcome after many weary months of weakness and pain, which sufferings she had borne with great patience and fortitude. Her wish to be interred in Hull was gratified. She was a native of that city, and he who now mourns her loss met her when stationed there about forty years ago. At the time of her birth her parents were connected with the Wesleyan Church, and she was the first child to be baptized in the Great Thornton Street Wesleyan Chapel.

During the Reform agitation they left the old body, and joined the new community; but soon after removed to Ireland, where her father was carrying out a large contract in the erection of a Pier at Kingstown. During the six years they were in the “Emerald Isle” they were connected with the Primitive Wesleyans, in which community Jessamine and her sister found a congenial sphere of Christian service, and became intimate with many of the ministers of that small body.

Subsequently the family returned to Hull and joined our Great Thornton Street Church, where the subject of this memoir became an active worker in the Sunday school – a work in which she had great delight. It was at Great Thornton Street she was joined in holy wedlock to the writer, to whom her memory is most precious. Rev. G. Lamb performed the ceremony, and subsequently baptized three of our children.

She several times said to me, “When I am gone, don’t write any eulogistic memoir. I don’t want much to be said about me. I am not worthy.” I am bound to respect her wish, and yet I cannot forbear saying she was a true helpmeet, ever manifesting the deepest sympathy with me in my circuit work. She was a wise counsellor and a most beloved companion. I owe more to her than I can tell, for any success I have realized. She was an able manager in the home, and a great worker in the Church. Morning and evening she occupied her seat in the house of God on the Sabbath day. Her class she attended with great regularity, and from the week-night preaching service she was seldom absent. She was at home in a prayer meeting speaking to penitents, and ready to engage in any legitimate work for the raising of funds for chapel or school purposes. Bazaars and tea-meetings found her amongst the most prominent and hardest workers, and in every circuit where she laboured she made many friends. I have received scores of letters since her decease, testifying that she was a woman most adapted for the position she held as the wife of a minister. Rev. Dr. Pigott says “Since my earliest acquaintance with her I have had a growing regard and intensified affection, specially because of her keen sense of right, kindly disposition, nobleness of purpose, and beauty of character.”

Rev. E. Dalton says: “Her long and painful affliction in all its severity will never be known except by God and the sufferer. The patience, self-forgetfulness, and fortitude evidenced by your dear wife to such a marvellous degree will be indisputable evidence of the strengthening, consoling, and sustaining power of Divine grace. Her record is on high, but the remembrance of good deeds done on earth remains with those over whom it has been your privilege to preside, and with whom she has had the joy of association. The way in which she has supported you in your promotion of the cause of Christ amid great pain will make her memory green and fragrant in the circuits in which you have travelled.”

About two hours before she breathed her last I heard her quoting Scriptures that had been a great comfort to her in her long affliction. Then the eyelids dropped, and she sweetly slept in Jesus, and her spirit passed into the presence of her Lord whom it had been her pleasure to serve. She departed in the 62nd year of her mortality. “The memory of the just is blessed.”

Jessemine was born in 1842 at Hull, Yorkshire to parents Jacob, a general contractor, and Sidonia.

Note: I have seen Jessemine spelt Jessimine and Jessamine in various records.