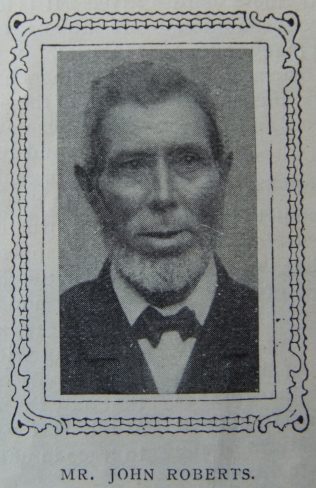 JOHN ROBERTS is the faithful Steward of Bagley Church, one of the oldest and strongest village societies in the Ellesmere Circuit, Shropshire. Our brother has grown up under the influence of worthy men whom this church has produced, notably, Mr. Samuel Davies, his predecessor in office, and a man of holy memory. Since his conversion in 1876 he has lived and wrought for his church. Of a retiring disposition, his voice is seldom heard in the official meeting, and yet there is not the slightest trace of indifference to his responsibilities in the service of the church. His regular attendance and punctuality at the Sabbath and week-evening services, his constant attention to all the duties of his office, and his loyalty, mark him out as an exemplary Primitive Methodist. His deep spiritual experience, his testimonies and prayers, give quality to the devotional meetings, and as an appreciative hearer of the ministry of the word, his presence is a source of inspiration to the preacher. Mr. Roberts is also an active worker in the Sunday school, where he has been engaged as a teacher for thirty-two years, and for the last twenty its devoted Superintendent and Treasurer. His unremitting interest in all that pertains to the welfare of the young has won for him a warm place in their affections. He is a total abstainer and non-smoker. His home life has a religious atmosphere, and the children have been taught to walk in the fear of the Lord. Three of them are already in church membership, and one son is a promising local preacher.

Mr. Roberts’ personal integrity wins the respect of all the villagers, and for his sincerity of purpose and fidelity in his work he is honoured and trusted by his brethren in the church.

John was born abt 1855 at Ellesmere, Shropshire, to parents Jacob and Jane. Jacob worked the land.