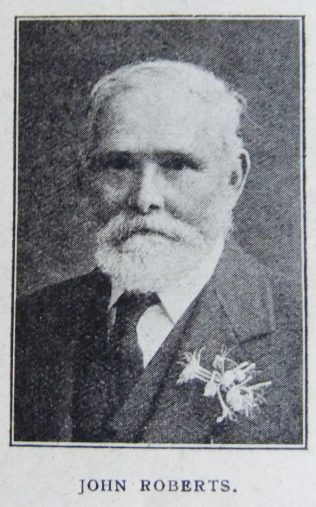 Transcription of Sketch In the Christian Messenger by Rev. G. Osborne

MR. JOHN ROBERTS, “the singer,” is beloved by scores of men and women, who gratefully recognise the influence of his sterling character at the formative period of their lives. As “John Roberts” he is lost among the many who hear this name in this neighbourhood on the Celtic fringe, but enquire for “John Roberts, the singer,” and hundreds will point you to a person known by “squire and peasant, colliery proprietors and miners, as a man worthy of trust. He is admired by all for the consecration of his many gifts, especially the gift of song to the Church of God and the welfare of the community.

Born of humble parentage at White House, Halton, Chirk, Denbighshire, on July 22nd, 1849, he was cradled in Primitive Methodism, and has been associated with our church for the whole of his seventy-one years. His home was a nest of song, where as a boy he learned the hymns and tunes which thrilled the Primitive Methodist gatherings of early days. His love of music early revealed itself. He picked up the crumbs of musical knowledge at the day-school, and later at a Tonic Solfa Class, which was held for a brief period at Chirk village, two miles away. He was now working the nightshift in the mine, and in order that he might take his lessons at Chirk, he would leave his pit-clothes at the engine house, get his lesson and hasten back, change, and descend the mine with the night-workers. Such was his progress, that, when fifteen years old, he was asked to conduct the singing for the Black Park Church, a post he has held continuously for over fifty-six years. He has witnessed the development of the church from the days of cottage-meeting to the commodious building, where a vigorous church with its many-sided activities wields a mighty influence in the village. His service proves the value of a consecrated singing master for the church.

He has organised a children‘s choir, an adult mixed choir, and a male voice party, all of which rendered splendid service to the church. In days gone by, many financial burdens were rolled away by the choir’s service, the soul of which was always “John Roberts, the singer.” The fame of his male voice party spread far and wide. Concerts given at Birkenhead, Liverpool, Doncaster and other places, are vividly remembered to this day.

But his best work has been done at home, and at no place is his name more revered than at Black Park. By his genius and inspiration this church is lovingly remembered as the home of song. To its Sunday School Anniversaries and Christmas efforts, gather old scholars from many parts of the country, drawn by the magic power of song. In the vale near by, the singing waters of the gentle Deva flow. The countryside is one of rarest charm and beauty, and in the midst of it our brother lives, his soul filled with the harmony of the woods, and the music of the river. His life’s passion has been to teach the truths of religion in terms of song. With Carlyle, he believes that “the meaning of song goes deep – a kind of inarticulate, unfathomable speech, which leads us to the edge of the Infinite, and lets us for moments gaze into that.”

He has been richly blessed by having one of God’s good women for a helpmeet. For fifty years they have lived together and reared a large family by Christian precept and example. Recently, an unforgettable church gathering was held to celebrate their golden wedding. In recognition of his long and valuable services, the Black Park Church presented the hero of this sketch and his wife with a cheque for £50, and other gifts. In all his work our friend acknowledges the loyal support of godly men and women, among whom, the names of Mrs. Ellis Jones, the late Samuel Roberts, and Edward Roberts, organist, are held in grateful remembrance.

John’s parents were William and Mary. William was a coal miner. Census returns identify the following occupations for John.

I have not been able to identify death records for John or Jane.