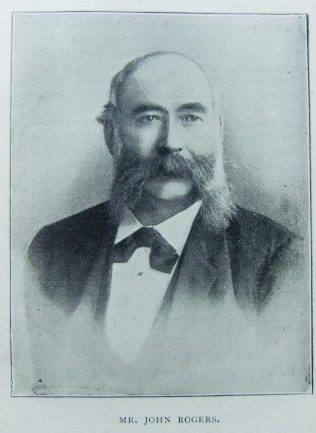 The history of Primitive Methodism is fragrant with the lives of saintly men and women who have laid their all upon the altar of service. Our church owes its success and power largely to their devotion and sacrifice. Not the least among those who have made Primitive Methodism a force to be reckoned with is Mr. John Rogers, who entered peacefully into rest December 6th, 1901. It is one of the mysteries of Providence that some of the noblest of God’s workers are called away in the flower of their strength, and when, seemingly, they can be the least spared. Mr. Rogers has been called away when his hands were full of good works, and when, it seems, as if his church needed him the most. But such is the Divine Will.

Mr. Rogers was born June 28th, 1841, in Malings Rigg, Sunderland, and spent the whole of his life in that town. He became closely associated with our church 37 years ago. Lying ill with fever, he was visited by the late Mrs. Erskine, who was Bible reader and visitor at the Flag Lane Chapel, and through her earnestness he was led to Christ. In the chain of events that succeeded, many have had cause to praise God for the day in which John Rogers gave his heart to the Lord.

It is at Hendon where Mr. Rogers’ work has centred. He became identified with the Mainsforth Terrace Chapel in 1866, the year in which it was opened. With unbounded zeal and consecration he entered into the activities of Christ’s cause. Twelve months after coming to Hendon he was appointed Sunday School Superintendent, a post which he occupied for two years, and for other four years he was the Assistant Superintendent. He joined the class of Thomas Fairley. His worth and power in the class meeting were speedily recognised; and he was appointed Assistant Class Leader. Subsequently he was asked to commence another class, which he did, and remained leader until the close of his pilgrimage. Mr. Rogers possessed the grace and qualities which eminently fitted him to be a class leader, which, indeed, made him an ideal class leader. In the class meeting he was at his best. His class was his joy and pride. He worked with untiring energy to make it a blessing. Seldom was he absent from his post. Nothing but absolutely unavoidable circumstances would prevent him missing his class. He prepared for it as thoroughly as a preacher for the pulpit. With consummate wisdom and devotion he looked after the welfare and spiritual interests of his members. Absentees were not long before they were called upon. Those in trouble or doubt received words of sympathy and sound advice. Nothing was a burden to him if he could but promote the welfare of his flock. If all our class leaders were of the stamp of Mr. Rogers, there would be no complaints of non-attendance, or the ineffectiveness of class meetings. He made it such a spiritual power and means of grace that the members longed for the class night to come round. Many are the conversions that have taken place in his class meeting. It is a testimony to his ability as a class leader that during the past year there was a record in members and quarterage.

Mr. Rogers displayed the same devotedness and earnestness in the other departments of the church life. He dearly loved everything connected with his own Zion. Only his home was more sacred to him. Very rarely was he absent from the means of grace, either on the Sabbath or the weekday. His presence was sunshine in the sanctuary, and his Amens and Hallelejahs were inspiration to those who occupied the pulpit. He was one of those devoted Christians who so stamp their individuality upon a church that its services do not seem the same when they are absent. In the prayer meeting he was a mighty power. He could wrestle with God. He could plead with souls as our founders must have done, and his timely words have been the means of bringing scores to make the grand decision. Possessed with a stentorian voice, he was a tower of strength in the open air, and he has often made the neighbourhood of Hendon ring with the sound of Jesus’ name.

Mr. Rogers was in the best sense a typical Primitive Methodist leader. He has occupied every official position, with the exception of local preacher. Though he was never on the plan, yet he has occupied the pulpit on several occasions. It was a pleasure to him to relate how on one occasion a brother missed his appointment, and he was compelled to take the pulpit, and that evening ten souls were led to Christ. Mr. Rogers had been a member of the District Committee for many years; he had represented his circuit at the District Meeting, and had the honour to be a delegate at the Grimsby Conference.

Mr. Rogers was associated in close friendship with the late Rev. Thomas Guttery. During Mr. Guttery’s first term of service in the Sunderland Second Circuit a remarkable revival broke out in Hendon. Hundreds were converted and signed the temperance pledge. In the revival Mr. Rogers rendered valuable aid, and by his care and counsel much of the fruit has been conserved until this day. It was an honour which Mr. Rogers claimed and prized that he had something to do with bringing the Rev. A.T. Guttery on the plan. During the revival Mr. Guttery preached his trial sermon, on which occasion several were converted.

The memory of John Rogers will be tenderly cherished for years to come. He was truly one of God’s noblemen. His character was a rare combination of gifts and graces which were wholly devoted to the service of God. One great purpose animated his life – to serve God and extend his kingdom, and everything had to bend to that. His loss to the Hendon Branch is inestimable. He has been guide, philosopher, and friend during the formation of the Branch the last two years. He was a shrewd business man, and had a clear insight into affairs and men. Yet with all his business perspicuity and shrewdness he never lost his simplicity of faith or fervency of spirit. He had, what he believed his Master desired all his disciples to have, an all-absorbing passion for the salvation of souls. He was a father in the church. All looked up to him for counsel. People were better for his acquaintance. It made them kinder, more generous, and more devoted to Jesus Christ and His Church. Not only in the church will he be missed, but also in the districts in which he followed his occupation as house agent. His goodness shone wherever he went, and he was continually seeking those who were crushed by sin, or the stern realities of life, and giving them words of counsel and comfort. His beautiful Christian home was a sacred spot to him. There he was a saint. Others loved him well, but his own family loved him better, because they knew him better.

There was nothing small or weak about Mr. Rogers. Nature and grace were both liberal to him. He had a splendid physique, a commanding presence, a generous heart, a great faith and a large outlook. He would have made his mark in any sphere. On several occasions he was approached to enter public life, but he declined, though he was an ardent politician, and took a keen interest in civic affairs. He was solely devoted to the interests of the church. We can thank God that he places such souls into our midst – holy men who are prepared to render their all in the service of the Master.  He has passed from our sight, but never from our memory and love.

He was taken to his resting place in the Sunderland cemetery on December 12th, as near to the Rev. T. Guttery as was possible. Prior to the funeral proceeding to the cemetery, a service was held in Mainsforth Terrace Chapel, and here a memorable scene was witnessed. The coffin was taken to the chapel half an hour before the mourners proceeded, and a long file of people walked past to have a last look at the face of a dearly-beloved friend at peace. The chapel was crowded, and a large concourse of people lined the street to pay the last token of respect. The service was of an impressive character, in which the Revs. A.T. Guttery, J.F. Sherman, F. Hobson, and Mr. J. Trevvett and Mr. H. Hide took part. Revs. J.F. Sherman and A. T. Guttery delivered appropriate addresses. The latter paid an eloquent tribute to the character of Mr. Rogers, describing his as one of the best men he had ever met.

John was born to parents Thomas and Jane. Thomas was a shipwright’s joiner.