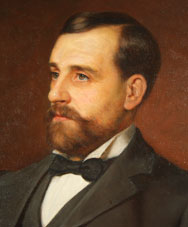 Joseph was born in Hull, Yorkshire. His father James was a Methodist. As a young man Joseph learned about flour milling in his father’s mill, working his way up from the bottom. When his father died in 1874, Joseph used the money he inherited to start his own business . This was a mere £500 out of a total estate exceeding £30,000! James Rank had a very low opinion of the abilities of Joseph to run a business.

Joseph had his own conversion experience in 1883 whilst attending an evangelistic mission at a Methodist chapel in Hull. After investing in a new steel roller mill, his business expanded and prospered and Joseph was generous in his support of various aspects of the work of the Methodist Church, initially from his own pocket and then from the various charitable trusts that he established.

Joseph was a Wesleyan Methodist, as was his father. However, James Rank’s first wife, Mary Ann, Joseph’s mother, had been a ‘Primitive’. The Parrotts, it would appear, were among the earliest members of the Primitive Methodist Church, whose founder, William Clowes, had lived a wild life as an apprentice in Hull, working at the Humberside Pottery. Clowes went back to Hull as a minister in 1819.

Mary Ann Parrott must often have seen and talked with Clowes during her girlhood. There is reason to believe that her father was converted under the influence of the sensational revival of religion brought about by the unconventional preaching of William Clowes and the ‘Ranters’, and Joseph Rank always had a special affection for the Primitive Methodists.

The Joseph Rank Trust has produced a biography of Joseph – Through the Mill – The Life of Joseph Rank by R.G. Burnett. To find out more about Joseph Rank, and download a pdf version of the book, follow the link to http://www.ranktrust.org/book.htm