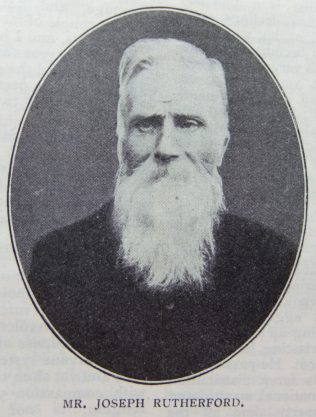 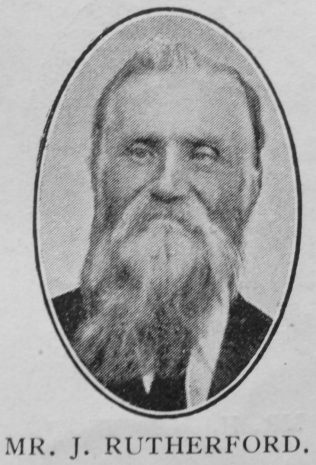 Transcription of ‘Sketch’ in the Christian Messenger by Rev. B.A. Barber in the series ‘Veterans of our Local Ministry’

Joseph Rutherford, one of the veterans of the Bishop Auckland Circuit, celebrated his jubilee as a local preacher two years ago. A native of picturesque Weardale, he early felt “the breeze of Nature stirring his soul,” and soon revealed a sympathetic eye and ear for her various sights and sounds. He moreover yearned not only for communion with Nature, but also Nature’s God, and when but a lad in his teens, became conscious of that vital relationship with the Unseen which Methodists term “conversion.” He straightway joined the Primitive Methodist Church, and became a local preacher at the age of nineteen. Long ere this he had revealed the disposition and habits of a genuine student. He had a thirst for knowledge, and it its acquisition derived no little inspiration from the ministers who travelled his native Circuit. His intercourse with Revs. C.C. McKechnie, William Lister and Henry Phillips was perhaps the most potent factor in his education. Their spell is still upon him, and he is not slow to express his indebtedness – particularly to the formative influences of the last-named.

From the very first he set before himself a high standard of pulpit efficiency. Few men know their Bible better. As an expositor his treatment of texts is always original. There is a vein of mysticism in his nature, and all his utterance bear evidence of much reflection on the “deep things of God.” His spiritual insight is doubtless the chief characteristic of his preaching. Throughout his long and honourable career his supreme endeavour has been to win men into the kingdom of God. The snows of age are falling fast upon him, but his passion to preach the everlasting Gospel remains unabated. He is not therefore superannuated, but still continues to take appointments in his own Circuit, where he is justly held in the highest esteem as one of the fathers of Israel.

The Connexional Editor says of Mr. Rutherford: “He has pondered long and deeply on the things of God, and there is about his pulpit utterances not a little of the ancient seer. He is indeed a prophet of the Most High, and few men possess, to quote the words of the late John Gill, ‘such an insight into the counsels of the Eternal.’ Those who know him well would readily admit that he has in many respects few equals among the local preachers of to-day. Not that he is an orator. Fluency of speech seldom goes along with gifts like his. Providence does not lavish all the talents on one man and where such prophetic vision and spiritual insight have been bestowed, it is not to be expected that along with them will be given all the graces of oratory. But in inspired moments Mr. Rutherford is capable of real flights of the most inspiring eloquence. His hearers realise that he has seen a vision and that as one who has talked with the Lord on the Mount, he is now seeking to tell what he has heard and seen.

But it is perhaps in the quiet intercourse of the fireside that he most readily unfolds the treasures of his mind and heart. There he pours himself out in rich and rare conceptions of Divine truth. One does not know whether to be more astonished at the wealth of his knowledge of Scripture truth or the choiceness of his quotations from the Divine Word. There are some who would confess how that, after a lapse of a quarter of a century, the memory of his use of Scripture lingers like a delightful fragrance in his mind. The freshness and originality of his conceptions, the profound spirituality which breathes in all his utterances, and the fire and fervour with which he delivers his message make him a preacher of wonderful influence and power. And what an appreciative hearer his is! Any man who has honestly prepared himself for the pulpit and possesses a message for the people will find at Witton-le-Wear one eager listener, and if he gets into conversations with this aged saint, he will be astonished to discover what unexpected meanings and implications have been discovered in his message that day. I recall long walks we had together in the years of long ago, when I was the superintendent of the station. He would accompany me most of the way home, and the memory of his kindness and appreciation will remain as long as I live. He helped and inspired me often when I sorely needed it, and the most astonishing thing to me was that in his humility he rather counted himself the debtor. He is indeed among the choice saints of our Church, and belongs to a race of whom we have now too few remaining.

Joseph was born abt 1838 at Stanhope, Weardale, Co Durham, to parents William and Sarah. William was a lead miner.

Joseph worked as a miner; initially mining lead ore and later, after moving to Witton le Wear, as a coal miner.

Joseph married Mary Brown (b abt1838) in the summer of 1863 in the Weardale Registration District. Census returns identify seven children of thirteen children.

Joseph died in the spring of 1909 at Witton le Wear, Co. Durham.