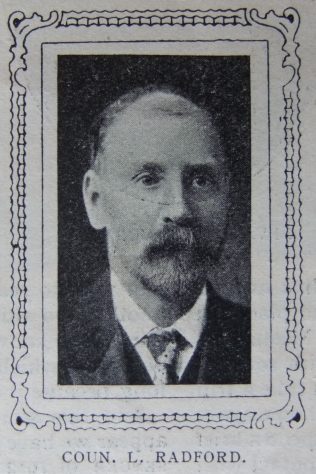 COUNCILLOR RADFORD, Society steward of Mosley Street Church, belongs to the quiet class of men. He shrinks from publicity. He has no fondness for presiding at meetings or giving speeches. Nevertheless, he does his part in the management of affairs, and is never loth to render generous assistance. He has been associated with the Mosley Street congregation all his life. He attended the school as a scholar. Then he became a teacher and subsequently the secretary. This record in church membership is distinctly creditable. Ever since he joined the inner fellowship he has consistently attended the services, shared the manifold responsibilities of church organisation, thrown the weight of his influence on the side of sainthood and progress, and set a good example. He has filled a place at the council-board of the church and rendered invaluable assistance to the management of its affairs. At the present time he fills the post of Circuit secretary, is a trustee of all the principal church properties on the First Circuit, and in two cases discharges the duties of secretary.

The work of Councillor Radford as Society steward extends over a period of seven years. He first assisted and then succeeded Mr. P.H. Howells, an invaluable officer of Mosley Street, who eventually removed from the town. These years have been marked by faithful attention to duty and patient forbearance when difficulties seemed especially trying. Notwithstanding that he has the care of a large business which often engages his attention to the very late hours of Saturday, and that he resides some distance from Mosley Street, he is found in his place every Sunday morning and usually is accompanied by all the members of his family.

Leonard was born in 1865 at Burton-on-Trent, Staffordshire, to parents John and Ellen. John was a baker, grocer and butcher (1871).