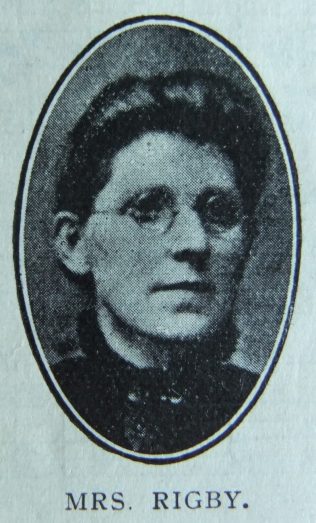 Transcription of obituary In the Christian Messenger

In the midst of life, at the early age of thirty-five, Margaret Alice, the beloved wife of Mr. Richard Rigby, of Crawford Village, St. Helens Circuit, passed beyond the shadows, February 1st, 1911.

Born at Orrell Post, near Wigan, and nurtured in a godly home – a Primitive Methodist home – she passed through the Sunday school, becoming a teacher in her teens, a member of the choir and also of the church. Her conversion is of special interest inasmuch as at an ordinary service conducted by Mr. T. Broxton, a local preacher, she rose in the midst of her companions and volunteered to give herself to God. Of course, she found heart-rest and peace – everyone does who thus resolves and seeks!

On her marriage, December 23rd, 1899, she removed to Crawford Village and lived in happy union with our brother bereaved. Two children were given to them, who survive. Early in 1910 the blight of desease came over the blissful home, and it was manifest that consumption claimed its victim. A heartful resignation, a calm unfaltering trust in God, a patience seldom seen in such suffering and a joy in God, made our visits to her sick-room a means of grace.

She entered the Valley in conscious fellowship with Jesus, and could say, “I will fear no evil for Thou art with me.” There were many manifestations of respect and love for the departed, and of sympathy with the sorrowing husband and children.

At the funeral and also at the memorial service conducted by the writer there was a large attendance.

“With Christ which is far better.”

Margaret was born on 31 October 1874 at Orrell Post, Lancashire, to parents Thomas, a coal miner, and Jane. She was baptised on 13 December 1874 at Station Road PM Chapel, Wigan.