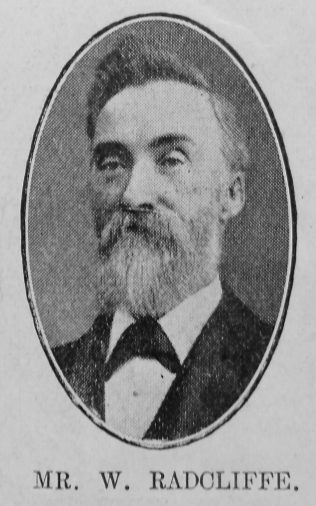 It was a life of rare devotion and self-sacrificing service that closed on May 6th, when after a short and sharp sickness William Radcliffe passed to the heavenly life. He had been in the employ of Sir William Hartley over twenty-five years and left home for his usual Blackpool round. There a sudden seizure prostrated him, and after a few days’ illness the end came. As the dawn stole over the world that May morning he passed into the light of eternal day. Born at Burscough January 26th, 1846, our dear friend was religiously inclined from boyhood, and though two miles distant from the Wesleyan Chapel never missed service or Sunday School.

When old enough for business he removed to Liverpool, and getting converted among the Primitive Methodists joined our Church, first at Burrows Gardens then at Boundary Street, where for sixteen years he engaged in every department of service, especially in Sunday School and choir.

Entering the employ of Sir William Hartley, in 1884, he joined our Bootle Church and the Aintree Church when the works were moved thither about 1892. Both at Bootle and at Aintree he was indefatigable, a tower of strength to the Church, and gifted with the versatility which made him indispensable in nearly every department of church work.

How genial and kindly and sympathetic he was, and what a friend! You could rely on him. Whoever failed William Radcliffe was at his post. A capable local preacher who in early life was recommended for our ministry, an ideal Sunday School Superintendent, a clever choirmaster, a first rate financier, he served our Church with unflagging devotion for more than forty years. How invaluable he was in the Sunday evening prayer meeting. As son, as brother, as husband and father he was almost a model.

The news of his death came with painful suddenness to a wide circle of friends, and a large concourse assembled for his funeral. Rev. J. Day Thompson gave a touching and beautiful address and Revs. S.G. Delafield, J. Mayles and W. Shipley assisted in the service. May Divine comfort be given to the sorrowing widow and family.

William was born on January 26 1846 at Bispham Green, nr Burscough, Lancashire, to parents Thomas, a master tailor (1851), and Benigna. He was baptised on 15 February 1846 at Mawdesley, Lancashire.

He married Emma Hannah Bolshaw (1849-1932) in the summer of 1870 in the West Derby Registration District, Lancashire. Census returns identify six of seven children.

William died on 6 May 1909 at Blackpool, Lancashire.