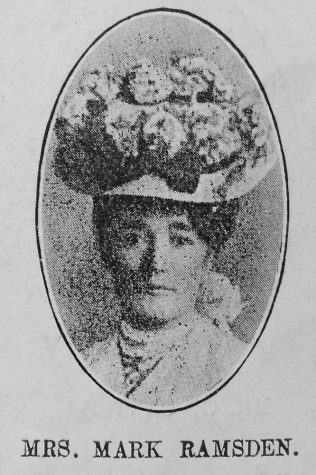 Transcription of Obituary published in the Primitive Methodist Magazine by J.L.

Chrissie Ramsden, wife of Mr. Mark Ramsden, and eldest daughter of Mr. and Mrs. John Lindley, of Manchester, was born on December 2nd, 1874, and entered upon her eternal rest on March 4th, 1908.

A Primitive Methodist of the fourth generation, she rendered valuable service to our church in various ways first at Newton Heath and latterly at the Great Western Street Church.

That a life so rich in the possession of personal qualities should have ended so soon is one of those mysteries which perplex and confound our finite minds.

Endowed with a healthy physical constitution, a cheerful, well-balanced mind, and a soul that over-flowed with affection, she used these gifts in the service of others, with a devotion so true that to know her was to love her.

Her sphere of service did not lie in the glare of public life, but in the quiet and helpful ministries of the home.

Sympathetic to an unusual degree with every form of human sorrow, she never thought of self. The two things for which she lived were to love and serve.

Her sun set while it was yet noon, but it set in a clear sky. The hope of eternal life through Jesus Christ our Lord robbed death of all its terrors. No cloud of fear or gloom shadowed her closing days.

Desiring to live, yet not unwilling to die, she reposed on the breast of the Good Shepherd, and was taken from the evil to come.

At the funeral service held on March 6th in the Great Western Street Church, the crowd of friends that gathered, and the wealth of floral tributes that covered the coffin testified in unmistakable terms to the affection which her love had inspired.

The service was conducted by the Rev. J.H. Taylor, M.A., Professor Humphries, M.A., offering a most appropriate and beautiful prayer.

At the close of the service her remains were carried to the Southern Cemetery, Manchester, and reverently laid to rest.

Chrissie was born on 2 December 1874 at Manchester, Lancashire, to parents John, a builder, and Betty.