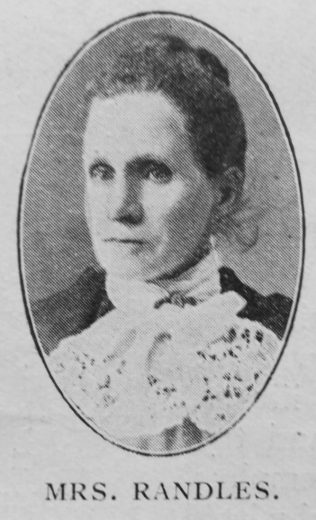 Transcription of obituary published in the Primitive Methodist Magazine by W.B. Bache

Mrs. Sarah Randles, of Newcastle-under-Lyme, was transferred to the service of heaven in her seventieth year, February 28th, 1909.

From childhood she was associated with our Higherland Sunday School, and early in life became a member of our Church. After her mar-riage to the late Thomas Randles, who was a local preacher with us for over forty years, and entered into rest two years ago, she became a quiet but very active worker of the Church. The light and life of Christ was most sweetly felt in her home, in the Church, and by all that came in touch with her.

Her Christly deeds of charity to the poor will be long remembered by many, and especially by the aged of the neighbourhood. And her quiet moral probity commanded the respect and esteem of all. She walked honestly towards them that are without and had a good report of all in the Church.

Her end, like her beautiful life, was calm and most peaceful. A few days before she passed away she said to the writer, “I am fully trusting in my blessed Saviour.” Even in her last moments her vision of the eternal was clear, her faith was strong, and her triumph over death was most glorious. The Rev. J.E. Leuty and the writer conducted the funeral service, and the latter, two weeks later, preached a memorial sermon, when the church was crowded.

Sarah was born abt1840 at Newcastle under Lyme, Staffordshire, to parents William Brough, a brick and tile manufacturer (1861), and Ann Highfield.

Sarah died on 28 February 1909 at Newcastle under Lyme, Staffordshire.