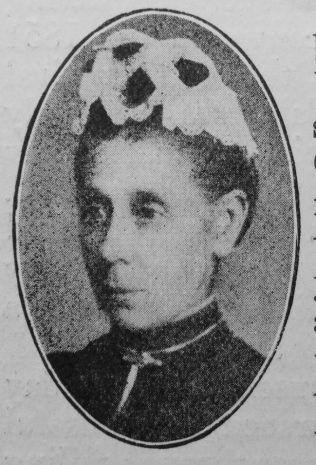 Transcription of obituary published in the Primitive Methodist Magazine by C.H. Lightfoot

Mrs. Ann Rawding was born at Retford in 1833. When twelve years of age she yielded her heart to Christ and began her membership with Primitive Methodism. While young she began to preach and for many years in town and village delivered the message of the gospel with great acceptance and success. Left by her father’s death the sole support of her mother and therefore having to work very hard, it was yet no unusual thing for her to walk eighteen or twenty miles and preach three times.

In 1863 she married Mr. W.A. Rawding, an esteemed Local Preacher and Class Leader of our Church, to whom she has been a helpmeet indeed. Their four sons, all connected with our Church and rendering valuable service, bear testimony to the Christian character and holy devotion of their mother. Excepting an interval of sixteen years Mrs. Rawding’s whole life has been spent in Retford in connection with our Carolgate Church. In all its struggles and achievements she was in the front rank and never flagged in her devotion. Obliged to give up preaching when family claims pressed upon her she continued to work strenuously in other ways. Never absent from the services if it were possible for her to be present, she was intensely interested in every branch of our work. Kendall’s History of our Church was eagerly looked for by her as the parts were issued, and every page was read.

After a brief illness our sister departed this life, August 25th, 1907, aged seventy-four years. The funeral was preceded by an impressive service in our Carolgate Church when a most suitable address was given by Rev. W. Robinson. On Sunday, September 1st, a Memorial service was conducted by the writer in our Carolgate Church.

Ann was born in 1933 at Retford, Nottinghamshire, to parents James, a policeman (1841), and Elizabeth. She was baptised on 20 November 1833 at St Swithin, East Retford.

Before her marriage Ann worked as a dressmaker.

She married William Armes Rawding (abt1836-1916) in early 1863 in the East Retford Registration District, Nottinghamshire. William was a master brick and tile maker (1891) I have not been able to identify the family in the 1871 and 1881 census returns. Based on the comment in the obituary regarding ‘family claims’, I suspect there were several children. Can anyone point me in the right direction? The 1891 census return identifies one child.