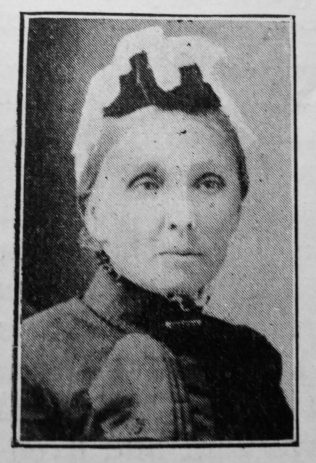 Transcription of Obituary in the Primitive Methodist Magazine by B.A. Barber

For several years prior to the erection of our Church in Ferryhill Village, Mrs. John Reed assisted in forming a Sunday School, and in organising cottage prayer meetings. When the project of building the Church was launched in 1862, she formed one of a small but heroic band of earnest workers. A modest enterprise to us, but to them it was a huge undertaking and involved untold labour and sacrifice. Of Mrs. Reed’s unfailing generosity, her willingness to help in every possible way, it would be difficult to speak in terms of too high praise. You had but to hear her speak of “our Little Chapel,” and instantly you knew that it was to her the most sacred sanctuary on earth. She had an eager, restless disposition, and packed her life with innumerable little ministries on behalf of those she loved, and of the cause that lay so near her heart. She kept an open house for preachers, and not a few – both ministers and laymen – remember her unstinted hospitality with grateful appreciation.

Her piety was of the practical sort, and found expression in every department of her life. It is significant that her counsel was sought by her friends and neighbours when in trouble and in need of guidance. There was a daintiness in her manner, a certain quaintness that always proved attractive. She had opinions of her own and was not easily shaken. Gentle, yet firm, she revealed a strong individuality. A true wife and mother, she was passionately attached to her home and children. Though of incalculable service to others, she evinced an exaggerated sense of her limitations, and with a beautiful humility would often lament that she had “accomplished so little.”

Death came on June 1st, 1906, telling the over-tired labourer it was time to go home. She had entered her seventy-seventh year, and for over fifty years had retained an unbroken membership with our Church.

Sarah was born abt1830 at Penshaw, Sunderland, Co. Durham. Her parents were George Siddle, a mariner, and Elizabeth.

Before her marriage Sarah was a school mistress.

She married John Reed (1836-1910) in early 1865 at Ferryhill, Co. Durham. John was a colliery engineman. He started a grocery business by 1881 and in 1891 was identified as a grocer  and draper.Census returns identify three children.