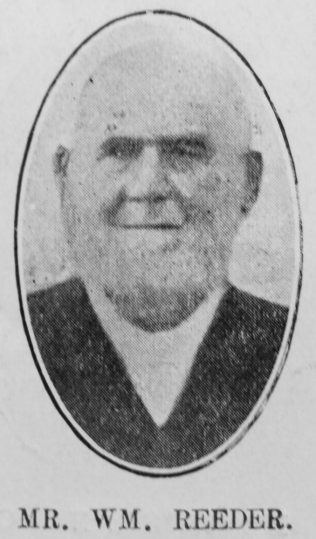 Transcription of Obituary published in the Primitive Methodist Magazine by R. Holman

Mr. Wm. Reeder, of Wisbech, entered into his reward March 5th, 1909. His departure was one of perfect peace, for he had long cultivated the heavenward view.

His father and mother both belonged to our Church, were both zealous in all good work.

Forty-seven years ago our friend stepped into the light and liberty of Christian experience at a prayer meeting in his parents’ house.

In labours he was very abundant, especially doing valiant service in open air work in days when policemen and parsons were generally to be reckoned on as opponents; but Brother Reeder and others of like mind were equal to all the demands. Instead of moving on at the bidding of the minion of the law or the representative of State religion, they stood to their guns; they prayed for their persecutors, and the powers of darkness elected to move on.

About four years after his conversion Mr. Reeder moved to London. There he joined our Canning Town Society. The facilities for evangelistic work which the streets and squares of the big city afforded were altogether to his mind, and used to the fullest and the best advantage.

He finally settled in Wisbech, where he undoubtedly did the finest work of his life. To say that he became local preacher, school superintendent, class leader in the Wisbech society gives but a poor idea of our brother’s worth and influence. He glorified everything that he touched.

Brother Reeder was finely mated. His wife, who survives him, entered wholeheartedly and sympathetically into everything that claimed his attention and commanded his interest. No man and woman ever lived more in each other’s affections or showed a greater disposition to share both the joys and the sorrows that fell to their lot.

Three of their children are on our roll book. The son-in-law is one of the pillars in our temple.

May the Lord be with us as He was with our brother. May He not leave us nor forsake us.

Note: Walsoken is a settlement on the north-east of Wisbech. Whilst Wisbech is in Cambridgeshire, the parish of Walsoken is in Norfolk.