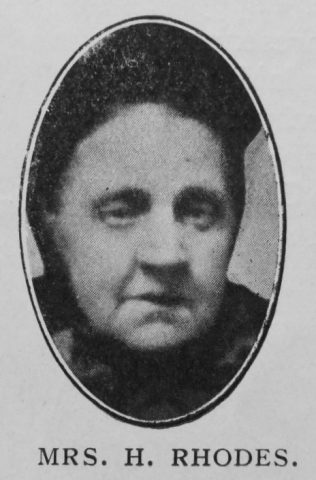 Transcription of obituary published in the Primitive Methodist Magazine by W. Overton

Bethesda Church, Stockport, has lost in Mrs. Rhodes one of its oldest and most faithful members. In early life she was associated with the Anglican Church, but when her husband joined our Church at Lancashire Hill nearly fifty years ago, she also became a member, and maintained an honourable and, until recently, an active connection.

With her husband, who predeceased her about eighteen years ago, she helped to build up what is now our Bethesda Church. Her faithfulness and devotion to her Church were beautiful, and second only to her love for her Saviour. She was rarely absent from her place in the sanctuary. In the home she manifested the sweetness and graciousness which come from close fellowship with her Lord.

The end came rather suddenly on Friday, January 12th, 1912, in her 76th year. Her remains rest in Willow Grove Cemetery. The writer conducted an “In Memoriam” service in Bethesda Church,

Hannah was born in 1836 at Bollington, Cheshire, to parents Joseph, a carter, and Thomasin. She was baptised on 28 February 1836 at St John, Bollington.