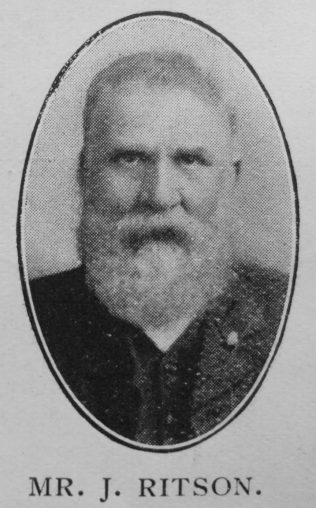 Transcription of obituary published in the Primitive Methodist Magazine by Jos. Hawkins

A feeling of consternation took possession of the Cumberland village of Dearham when, on the 28th February, 1910, the report came that owing to the fusing of an electric wire in the mine, and John Ritson’s heroic attempt to deal with the danger single-handed, waving all others to a place of safety, he had sacrificed his life.

In this village our beloved brother has spent the whole of his more than three-score years, and practically the whole in connection with our Church. His death seemed the more sad because other stalwarts had but recently gone to their reward. As Mr. Gilbertson said in his sermon, “No Jew ever loved Jerusalem more than Brother Ritson loved his Church.” His venerable father was a preacher, and though by some accounted eccentric, no resident in Cockermouth was held in higher esteem, and he was, by the way, by marriage related to the poet Wordsworth.

His son was cast in other mould, large and warm-hearted, yet withal most retiring and reserved, a man of unostentatious deeds and of few words. Having no children of their own, it seemed as though he, with his sorely bereaved wife, were father and mother to a multitude, and their cottage an established place for the rest and entertainment of the preachers. It seemed, also, as though all men might trust their life and fortune in his hands. Besides being treasurer for a long term of years to the Church Trust, he was treasurer for 38 years to the Order of Rechabites, and treasurer to the village recreation and reading-room. When Miss Lawson, the esteemed sister of the late Sir Wilfrid Lawson, who did untold good by stealth in succouring the distressed and aged poor, required an almoner for this village, she wrote requesting John Ritson to do for her this duty.

On Sunday, May 8th, Rev. J. Burton, Circuit minister, presented diplomas of honour in the Sunday School, and here is one strongly framed in oak to John Ritson, who gave 38 years of devoted and uninterrupted service to this work amongst the young people of the Church. Then, besides a long Trust treasurership of 22 years, and teacher 38 years, and often steward, he was class leader for 19 years.

Moved by a great sorrow, people from near and from far gathered to his burial. Those taking part in the service were the Circuit minister, the Rev. J. Burton; the Rev. J. Hawkins, former minister; the Rev. J.G. Cushing, representing the Carlisle and Whitehaven District Committee, of which our brother was a member; and Mr. W. Gilbertson.

John was born in the spring of 1848 at Dearham, Cumberland, to parents George Ritson, a coal miner, and Elizabeth Plummer.

John worked as a coal miner.

He married Hannah Irving (1849-1917) in the spring of 1871 in the Cockermouth Registration District, Cumberland.