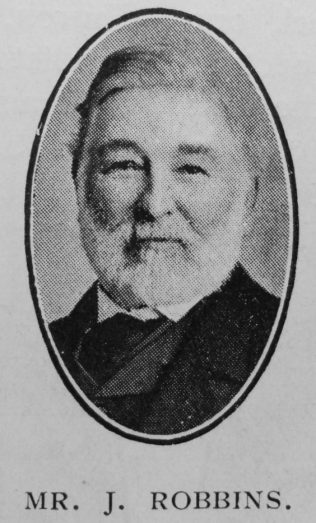 Transcription of obituary published in the Primitive Methodist Magazine by E. Parsons

Tipton Circuit and Bell Street Society have sustained a great loss in the death of John Robbins, who passed away on Saturday, 8th of July, 1911, aged 75 years. His connection with Bell Street goes back for fifty years. Forty years ago he was one of the Superintendents of the Sunday School, also a class leader and a trustee. He was a true member and filled all his offices with great credit. When the debt was crushing the church his wise counsel and generous gifts helped to save it.

The last trustful year of his life was passed in the quietude of his home, where he was cared for with tenderness by his wife and children. In his growing weakness the Bible was his daily delight. Often he would be heard to quote some favourite passage of Scripture. One of the last things he said was, “I am tired, I am waiting for my Saviour.”

Our deep sympathy is with the widow and children in their great loss. May they, with us, meet him in God’s eternal rest! The following resolution was passed at the September Quarterly Meeting:— “We desire to record our great sorrow at the death of Mr. John Robbins, who has been a member of our Church for upwards of fifty years. In that time he has filled many important offices attached to Bell Street Church: Sunday School superintendent, class leader, and leader in the temperance cause. In all these offices he discharged his duty with great faithfulness. He was most generous to every department of the Church, and his greatest joy was to see its prosperity. His death is a loss to the Church and Circuit which is great indeed. His kind disposition and gentlemanly bearing will be remembered for many years to come. We deeply sympathise with his widow and children and assure them they have our sympathy and prayers in their loss, for their loss is ours too. We believe the memory of his life will be a constant comfort and inspiration to them to fulfil life’s duties as he did. And may we all at last meet him in the eternal home.”

John was born in 1836 at Tipton, Staffordshire, to parents Joseph Robbins, a moulder (1851), and Rebecca Hickman.