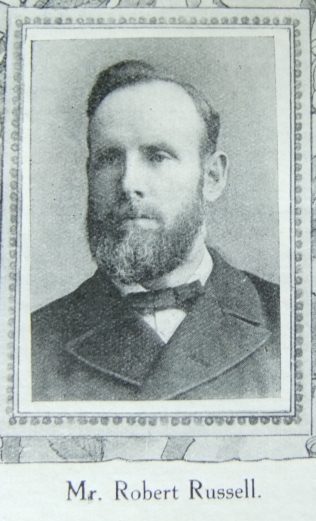 Mr. Russell, Senior Steward of Willington Circuit, was born in Lanarkshire sixty years ago. In early life his family removed to Northumberland, where he was converted, joined the Church and became a local preacher. Subsequently he lived at Spenymoor for a few years, removing to Binchester more than twenty years ago.

When Willington was formed into a separate Circuit in 1906 he was elected as one of the Stewards. In this office he has sought to lead the Circuit to prosperity; and success is crowning his labours.

Our Steward is studious, fervent, consecrated. His presence in the services of the church, class meetings, Sunday evening prayer-meetings specially, is a great asset. And his labours in the pulpit are marked by reverence, intelligence, unction – conversions being always the aim and often the result.

Robert was born abt 1851 in Lanarkshire to parents John and Jennet. John was a coal miner.

Robert followed his father as a coal miner.