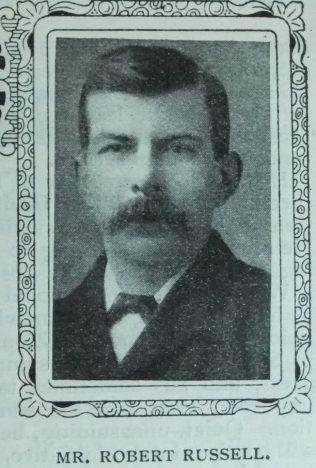 Born thirty-two years ago at Carluke, Lanarkshire, Mr. Robert Russell springs from a family which joined our Church in Johnstone, near Paisley, in 1837, as the result of a camp meeting. Rev. Alexander McKechnie was a grand-uncle, and Miss F. McKechnie is a cousin of our friend. Fifteen years ago Mr. Russell became a member of our Church, and has rendered valuable service as Sunday school secretary, a position he held for eleven years, and a more painstaking, prudent, and efficient secretary could not be desired. He is now in charge of the Young men’s Bible Class, and as the assistant leader of a very large and prosperous society class has for over five years rendered yeoman service.

He is a local preacher to be relied on for careful preparation, an intelligent presentation of the truth, and devotion to his work. He always has something to say worth hearing, and having said it he closes his discourse.

Well versed in Connexional law and usage, he has perhaps a wider knowledge of what is going on throughout our Zion than any official in Scotland. He is in sympathy with progress, and has sometimes taken the lead in important reforms in the working of his station. Quiet, unassuming, he yet on occasion will boldly take the initiative, and his usually sound judgement has often been of great value.

In business with his brothers as a brass founder, Mr’ Russell is a bust man, but he never neglects church work, and is one of those steady-going, shrewd, painstaking workers to whom our Church owes so much.

Robert was born abt1875 at Carluke, Lanarkshire, to parents John and Elizabeth. John was a brass founder. Robert’s paternal grandmother was Jane Craig McKechnie.