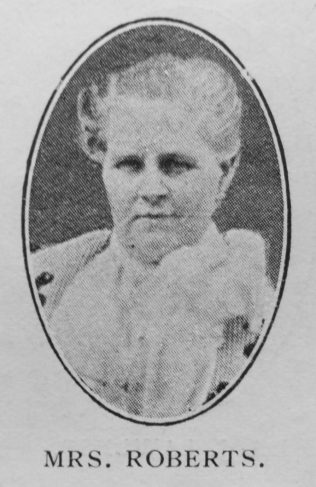 Elizabeth, wife of James Roberts, The Leasows, Coalbrookdale, Salop, was born June 17th, 1860, and entered into rest, October 2nd, 1909. Converted at the age of 16, for over 32 years she maintained a beautiful Christian character, and matured in grace through much discipline of heart and life. During her nineteen years’ residence in the Dawley Circuit she was a pillar of strength to the Horsehay Church, and for many years aided her husband during his Circuit Stewardship.

She spent many happy years in Sunday School work, and it was her joy to lead many into the kingdom. She was a most devoted wife and mother. It was a real joy to her to minister to the needs of others.

It was hoped that many years of labour were in store for her, as she was a most healthy and vigorous woman, but, about six months previous to her death, a terrible malady overtook her. All was done that medical skill and human kindness could suggest, but a few days after a painful operation in Wolverhampton hospital, she said “Good-bye” to her husband and children.

She was interred in Little Wenlock Churchyard by Rev. Isaac Brentnall, in the presence of the Vicar of the Parish, the Mayor of Wenlock, and many sympathising friends.

Elizabeth was born on 17 June 1860 at Tattenhall, Cheshire, to parents Francis Shaw, farmer and local preacher (1861), and Frances Hannah Sadler.