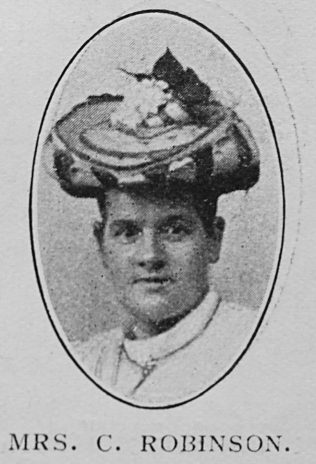 Transcription of obituary published in the Primitive Methodist Magazine by Geo. Lee

Our Church at Middlewich, in Sandbach Circuit, has recently suffered a serious loss in the death of Mrs. C. Robinson, of Cledford Bridge. Our sister was born at Congleton, her parents being respected members of the Baptist community. After her marriage she and her husband came to reside at Moulton, in Northwich Circuit, where they both joined our society and kept open-house for our preachers. Here their four sons were born, all of whom are connected with our Church. Depression in trade led to their removal to Middlewich, since when our society has had no more diligent worker than the deceased, till sickness laid her aside in January last.

Her hope was to see our prospective new chapel reared. To this object she gave her best thought and effort, and in it retained unabated interest during her protracted sickness. For the sake of her loved ones she greatly desired to live. She, however, met death bravely; and her faith failed not. After six months of agonising suffering, our sister passed peacefully to rest, July 12th, in the 54th year of her age.

Harriet was born abt1857 at Congleton, Cheshire, to parents John Gee, a painter (1861), and Mary Gordon.