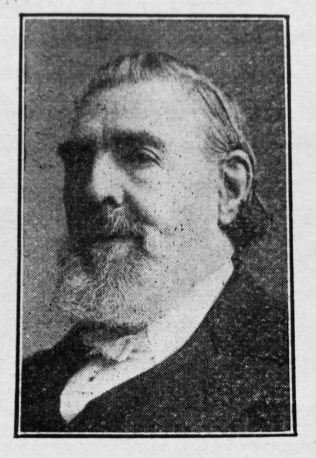 Mr. John Robinson, of the Hackney Road Circuit, London, was born in London, July 29th, 1820, and departed this life September 21st, 1905. He was one of the oldest local preachers in London, and must have inherited good physical powers, for up to within three months of his death, he worked at his trade as a cork cutter, making full time each day.

Nature had favoured him with marked features, which made him a striking personality. In the earlier days of his life he was sceptically inclined, due to his home training and associations. For some time he attended a science lecture hall, until providence intervened and turned his feet into another path, e.g., a Christian minister having to attend the hall was giving evidence of the hope that was in him, when the auditors began to behave in a very unseemly manner, at length becoming boisterous; Mr. Robinson claimed for the speaker fair play, and because they would not give him a patient hearing, he denounced them as un-English.

The following Sunday he and his now sainted daughter Lucy went to Sutton Street Chapel and heard Mr. Nicholas preach. Mr. Robinson was so powerfully affected by the service that he prayed for forgiveness.

He was so unhappy that when he retired to his bed-chamber he wrestled with God for salvation until two o’clock the next morning. At length he gained what has proved to be a real victory.

The tests of real repentance are times of temptation. Viewed thus Brother Robinson’s conversion was perfectly genuine, for it withstood the test of severe persecution from his uncle, an avowed infidel, in whose service he was employed. Although he was driven from his uncle’s service, he maintained strictly his integrity.

It was not long before he opened his house for a Bible Class and a Society Class. Being a great lover of music, his services were requested by our choirs, and he frequently assisted at school anniversary services with his violin. As he was in many respects suited to the position, it was not surprising that he was soon called upon to become a local preacher.

In his modesty he at first shrank from the calling, but after having taken up the work he did his best to become a workman, one needing not to be ashamed.

He became a very popular preacher, his services were in great request, and he was held in high esteem, but above all he was a soul winner. It was a real joy to hear him relate how sinners were saved at the services he had conducted.

He joined the Christian Community (a then united society for evangelical work), and as a true servant of Jesus Christ he preached in the open air, visited lodging houses, hospitals and workhouses. In the open air work he was specially gifted, only a few weeks before his death, he gave an address outside the Oval Church, which made a profound and lasting impression.

He was a man of true nobility, for sixty-six years he was an exemplary husband. Mr. James Wood, his veteran friend, says: “Brother Robinson’s married life has been a perpetual courtship.” As a father he was loving, honoured, and revered. The recollection of his life is blessed to all his children, his grand and great grand-children, who number in all over fifty-three.

As a member and official of the church he was a brother beloved, as a friend he was faithful and constant. He took a keen interest in all connexional matters, and read carefully our periodicals until the last. He was even more anxious to seek to further the interests of our denomination. In matters social, political and national he was abreast of the times.

Suffering during the latter part of his life from deafness, it was difficult for him to hear the preached word, but he made up for the loss by reading the “Christian World Pulpit.”

The last time he attended the Oval Church he told the writer he had heard better than usual, and after he was taken ill he remarked, “Your last sermon was specially for me. Yes, for me! ” This was the text, “For He hath said, I will never leave thee, nor forsake thee.” He added, “I believe it, every word of it.” The funeral was attended by a very large number of his friends, the Rev. C. Spooner conducted the service, the Rev. J.F. Porter  offering prayer.

The funeral sermon was preached by the Rev. C. Spooner. The prayers of all are asked on behalf of Mrs. Robinson, his most devoted wife, and family. Adieu, dear brother, “until the day break and the shadows flee away.”

John was born in Canterbury, Kent. His father, William, was also a cork cutter.