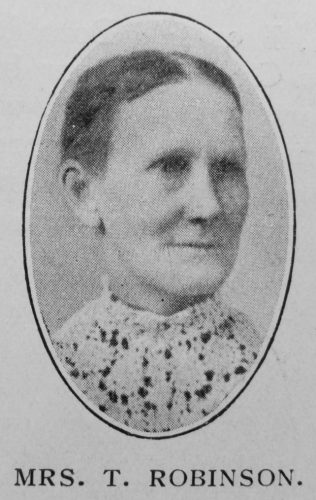 For its present position Scottish Primitive Methodism is enormously indebted to Thomas Robinson, of Hurlet, in the Paisley Circuit, and how much he owes for the service he has been able to render during the last half century to his now sainted wife he himself would find it impossible to say. Year in and year out our people have been accustomed to look to Mr. and Mrs. Robinson for help and inspiration, and never in vain. Their gifts have been generous in the extreme, and their labours incessant. Their home has been a place of rest and refreshment to ministers and laymen not only belonging the North British District, but Primitive Methodism as a whole.

For years it was a convalescent home for the weary and the worn of our ministry. Over that home Mrs. Robinson presided with grace, tact, and kindly sympathy, a seconding and sometimes instigating her husband in his varied ministry for Primitive Methodism, for Temperance, and for the cause of humanity. The fine organ in our Paisley Church and the beautifully situated Manse were both her gifts. She took the deepest interest in the work of the Church, and was ever ready to help in every way within her power. She rejoiced in its prosperity, and mourned over its decline. She collected the largest sum for Missions in the North British District for over thirty years.

Converted in the early days of our Church in Paisley our sister was a link with the past. Born in the village of Kesh, County Fermanagh, seventy-one years ago, Margaret Robinson came of a family some of whose members were associated with the Primitive Wesleyans. Her father, mother, and family came to Paisley about 1855, and attended our services at Abbey Close Hall. This was in the days of Rev. Philip Maddox. Mrs. Robinson, her sister, and brother, got converted in 1858, and their house became the preachers’ home. It was in 1862 that Mr. Thomas Robinson came on a visit to Paisley, where he found among the Primitive Methodists a wife and a spiritual home. They, too, at once made a home for the preachers, for Temperance workers, and political speakers.

On the religious side our sister was of immense value to her husband, steadying and guiding him in the early and impulsive days of his religious life. Her fine self-control, her kindliness and sympathy, her thoughtfulness and religious spirit were illustrated in ways of which we cannot venture to write here. She was the wise woman looking well to the ways of her household, and smoothing the path. of those around her in difficult places.

Spare, but vigorous and active, she had no serious illness till within the last year, and then a mortal disease assailed her. A critical operation served to prolong her life, but it became evident that her days were numbered. Throughout her long and painful affliction she was the object of the tenderest solicitude, and the most assiduous nursing. She had ever a calm and settled assurance in a Saviour who was with her all the way, and made the most complete arrangements respecting all her affairs. The end came on Friday, November 11th, and on the Tuesday following the mortal remains of this Mother in Israel were laid to rest in Hawkhead cemetery.

In the passing of Mrs. Robinson not only is a link with the past severed but a gap is made in Scottish Primitive Methodism of no ordinary kind. She will be missed by so many and in such varied relations. Her ministry, though quiet and unostentatious, was so kindly and persistent. She was ever the same. Her work abides. “Blessed are the dead which die in the Lord.”

Margaret was born abt1839 at Kesh, County Fermanagh.