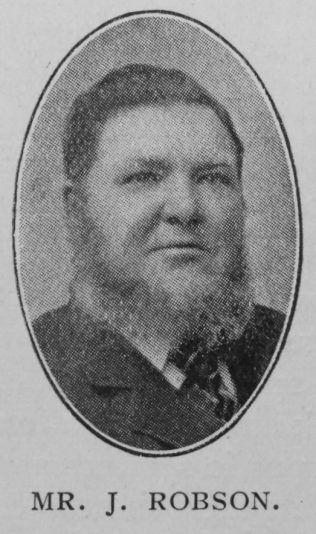 Transcription of obituary published in the Primitive Methodist Magazine by J.

A notable local preacher has been lost to the Beverley Circuit by the death of Bro. James Robson, of Cherry Burton. Born in 1841, from his teens he had been a devoted Primitive Methodist. Notwithstanding that he left school at the early age of nine years, and gave the rest of his boyhood to farm service and his manhood to the village smithy, he was a man of wide reading and possessed one of the best stocked libraries of the district.

He qualified as a local preacher during his apprenticeship, and for more than half a century carried the gospel story not only to his neighbours, but to distant places as well. Mr. Robson made it a matter of principle to walk to his appointments when the journey was made on the Sabbath.

He died in the Lord, and those who knew him are forward to testify to his splendid character, his great acceptability as a a preacher and his noble usefulness.

James was born in 1841 at Beverley, Yorkshire, to parents Robert, who worked the land, and Ann. He was baptised on 26 September 1841 at St Mary & St Nicholas, Beverley.

James died in the spring of 1911 at Beverley, Yorkshire.