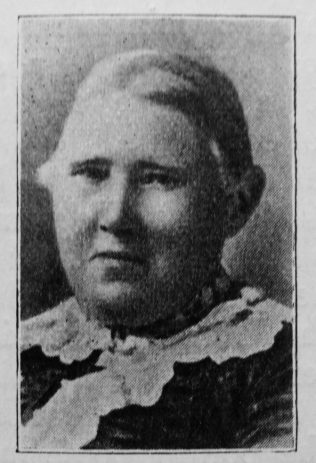 Transcription of Obituary in the Primitive Methodist Magazine by Joseph Langford

The church at Rhostyllan, in the Wrexham Circuit, has sustained a great loss by the death of Mrs. Ann Rogers, which took place on Sunday, January 21st, 1906, in the sixty-ninth year of her age. She was converted fifty years ago, through the earnest labours of the late Miss Bennett, of Chester, and became a noble and noted Christian.

In a short time after her conversion, she with her husband, Henry Rogers, removed to Rhostyllan. There were no Primitive Methodists in this village, or nearer than the town of Wrexham, so, in company with the Rev. Ralph Maddocks, Mrs. Rogers missioned the village, and with the consent of her husband opened her house for the preaching of the Gospel, where religious services were held for twenty-four years.

The preachers were always welcome and most hospitably entertained in her home. Principally through her efforts a beautiful new chapel was erected with school room attached, a standing monument to her memory, and through her indefatigable and self-sacrificing labours in giving and begging she lived to see the most of the debt wiped off.

She was in labours abundant, visiting the sick and the dying of all denominations alike, her Christly life, cheerful spirit and earnest prayers, brought sunshine into the darkest home.

The whole neighbourhood has lost a sincere friend. The last fourteen years of her life were spent in widowhood, but she held on her way undaunted, until the Master said “It is enough.” All her children are members of Society, four sons and three daughters; one son is a very acceptable local preacher and circuit steward of the Wrexham station and another is District Councillor.

The funeral took place on January 24th A large procession of friends from far and near followed the remains to the chapel, where a solemn and impressive service was conducted by the Rev. R.W. Burnett, assisted by the Rev. Thos. Jones, Calvinistic Methodist minister, and the writer, Mr. J. Langford. Rev. R.W. Burnett officiated at the grave in Esclusham churchyard.

The Rev. W. Smith, F.R.A.S., writes:- “Your mother was always a preachers’ friend, and her home always afforded hospitality and warmth of sympathy. She was full of encouragement and inspiration.”

Rev. J. Booth says:- “Mrs. Rogers was a thoroughly good woman and a true friend, Genuine and deep piety was hers.”

Rev. G. Rennison writes: “How kind she was! How loyal to her Lord and His cause! How bright was her smile!”

Rev. Thos. Greenfield writes:- “Your mother was one whom I respected very highly, and on many occasions I have been inspired and blessed by her supplications and shall never forget her many kindnesses to me in your home circle.”

Rev. W. Hughes says:- “She was one of those who lived to be missed. You have lost a mother, but she has left you a name that will live for ever in the hearts of all who have known her.”

Mrs. Ivison, of Brigg, Lincoln, says:- “She was a Christian of a very high order.”

Also letters were received from the Parish Council, and the Circuit Quarterly Meeting, Wrexham, speaking in the highest terms of her life and work and of the loss the village had sustained by her removal.

Ann was born abt1837 at Worthenbury, Flintshire. I have not been able to identify her parents from online records.

She worked as a servant before her marriage.