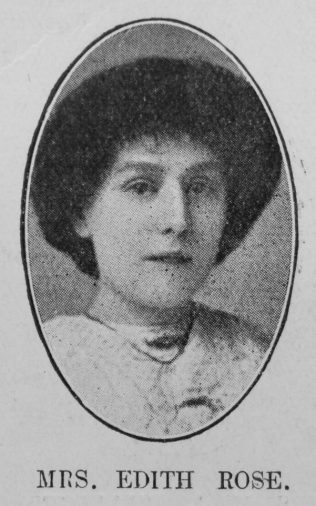 Transcription of Obituary published in the Primitive Methodist Magazine by P.

Edith Maud Kemp was born in November, 1880. She died, after less than a year of married life, on April 13th. Her parents were the late Mr. and Mrs. W. Austin Kemp, of Stepney Green, for many years among the best known of London Primitive Methodists, especially for their loyal and generous part in the cause at the old “Tab.”

“Birdie,’ as she was known to her friends, was one of the sweetest of souls; from very early years showing a Christly gentleness of bearing, which only became more marked as time went on.

Religion meant to her more than prayers, hymn-singing, or Bible reading, much as she loved the public means of grace. She knew Christ as a real living personality, and to know her was to know something of Him.

During the few months she was permitted to serve the church as the wife of the Rev. Richard Rose —then of the Peaton Strand Circuit— she exercised angel-like ministry in the homes of the country folk, and thus won an affection of no common kind.

In her unspeakable sufferings all the fine qualities she possessed shone with diviner light. Death had no terrors for her. She only wanted to obey the will of God. Her experience was:

“If life be long I shall be glad
That I may still obey.
If short, yet why should I be sad
to soar to-endless day?”

The sympathy of the public was shown by the great numbers who witnessed the funeral, and many lovely wreaths were sent, including one from the Peaton Strand Circuit.

Edith was born in November 1879 in Stepney, London, to parents William Austin Kemp, an oven builder (1901), and Eliza Amy Clark.