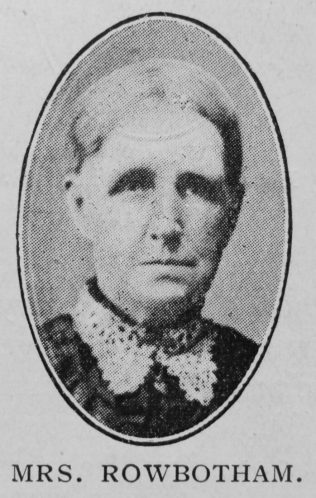 Transcription of obituary published in the Primitive Methodist Magazine by S.K. Chesworth

The painful news of the death of Mrs. Rowbothom was received on February 26th, 1912. She was interred at Willow Grove on Thursday, February 29th, Rev. J. Williams conducting the service. She leaves husband, three daughters and one son to mourn the loss of a faithful companion, guide and counsellor. She was a good Christian and a devoted Primitive Methodist.

Cradled in Primitive Methodism, she very early evinced an interest in the Church, and when she removed to Manchester, joined our Ogden Street Chapel and subsequently took a keen interest in our cause at Higher Ardwick and Gorton Brook. It was her devotion to our cause at Gorton Brook that made her an example of value to the writer, and her testimony in the class meeting was inspiring. In 1910 she removed to Stockport, and in the months of her quiet retiring eventide she continued to exert a strong Christian influence.

Sarah was born in late 1840 at Hadfield, Derbyshire, to parents John, a cotton spinner, and Sarah.

Before her marriage Sarah worked as a cotton power weaver (1861).